Somewhere on a plateau above a small forested village in Poland, near the border with the Czech Republic, lives Janina, except she doesn’t like that name, she insists on being called Mrs Duszejko.

An astute observer of things around her, she is more of a winter type, has knowledge and interest in the influence of planets and houses, likes to translate Blake’s poetry and read his letters, has great respect for all sentient beings, except perhaps those who hunt Animals for sport and take joy in it.

The novel opens as her neighbour whom she refers to as Oddball knocks on her door very early one morning to inform her that their mutual neighbour Big Foot is dead. The two visit his home and do what they thing good neighbours should do, respectfully arranging the contorted corpse, though Oddball’s son Black Coat (a policeman) later tells them off for moving the body.

Our Feet Connect Us

They astonished me. I have always regarded feet as the most intimate and personal part of our bodies, and not the genitals, not the heart, or even the brain, organs of no great significance that are too highly valued. It is in the feet that all knowledge of Mankind lies hidden; the body sends them a weighty sense of who we really are and how we relate to the earth. It’s in the touch of the earth, at its point of contact with  the body that the whole mystery is located – the fact that we’re built of elements of matter, while also being alien to it, separated from it. The feet – these are our plugs into the socket. And now those naked feet gave me proof that his origin was different. He couldn’t have been human. He must have been some sort of nameless form, one of the kind that – as Blake tells us – melts metal into infinity, changes order into chaos.

Referring to her Little Girls draws attention to another mystery, and while she doesn’t share the story of what happened to them initially, they are an absent presence throughout the story, a conundrum that will eventually be revealed, including its connection to the death of the neighbour. 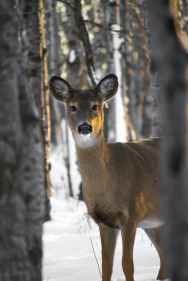 Photo by Devon Rockola on Pexels.com

Described as reclusive, unconventional and eccentric, she might well be the most sane person in the village, certainly she is one of the more interesting. An intellectual and a mystic, a lover of nature, philosophy, astrological influences, animals and wildlife, surviving in a village that reveres hunting, an activity undertaken by the Commandant of Police, the local priest, the village President and other dominating types puts her in the firm minority – despite her isolation, she finds her circle within the community.

Unhappy at the way the authorities are conducting their investigation, convinced by clues she has observed – ominous deer tracks – she writes to the police bringing their attention to her theory of revenge by wildlife against the actions of hunting humans. And recalls her earlier reports to them about Big Foot’s poaching activities. Death brings another element to her theory, the effect of astrological shifts and patterns.

I could also tell that he didn’t understand everything that I was saying – firstly for the obvious reason that I was using arguments alien to him, but also because he had a limited vocabulary. And that he was the type of Person who despises anything he can’t understand.

A Community of Soul Mates 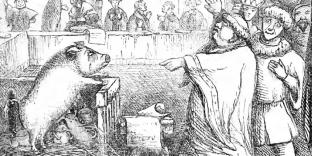 Dizzy, a former student, now her 30 year old friend, helps with the Blake translations, though is unconvinced by some of her  theories concerning astrology and the revenge of animals, bolstered by her having discovered real animal trials, which peaked in 14th to 16th century Europe.

It was believed by many medieval authorities that ‘crimes’ committed by animals were the devil’s work and letting them go unpunished would provide an opportunity for the devil to take over human affairs.

Dizzy, who’s prone to effusive digressions on the topic of Blake’s symbolism, has never shared my passion for Astrology. That’s because he was born too late. His generation has Pluto in Libra, which somewhat weakens their vigilance. And they think they can balance hell. I don’t believe they will manage it. 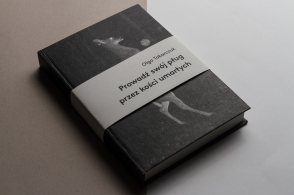 When he challenges her for going around telling people about those Animals, concerned for her reputation, she  is outraged.

‘One has to tell people what to think. There’s no alternative. Otherwise someone else will do it.’

Another of the villagers is the young woman who runs a vintage clothing shop, a place Janina discovered one day when she was frozen through and hungry. The characters she befriends represent hope in an otherwise worrisome society.

The whole thing was a mixture of socialist café, dry cleaner’s and fancy-dress costume hire. And in the middle of it all was Good News.

That’s what I called her.  This name suggested itself irresistibly, at first sight.

Mrs Duszejko (Janina) is fed up and no longer young, she says what she thinks and doesn’t care what others think of her. She reads the signs and takes action. She’s an unexpected delightfully, transgressive heroine, of her own existential thriller.

I absolutely loved it and was surprised at how accessible a read it was, given this is an author who recently won the Nobel Prize for Literature. Her power to provoke by telling a story is only heightened by the suggestion on the back cover that her ideas presented here caused a genuine political uproar in Poland.

The Guardian: Interview – Olga Tokarczuk: ‘I was very naive. I thought Poland would be able to discuss the dark areas of our history’ by Claire Armitstead 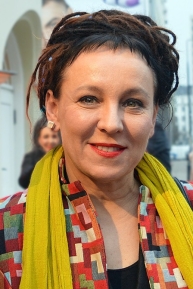 Olga Tokarczuk is an Aquarian, a Psychologist and Jungian expert, a Polish essayist and author of nine novels, three short story collections and her work has been translated into forty-five languages.

Her novel Flights won the 2018 International Booker Prize, in Jennifer Croft’s translation. In 2019, she was awarded the Nobel Prize in Literature. Primeval and Other Times (1996) was her first work translated into English in 2010.

Her most recently translated novel, written over six years, The Books of Jacob (2014) was published in English in Nov 2021.

24 thoughts on “Drive Your Plow Over the Bones of the Dead by Olga Tokarczuk tr. Antonia Lloyd-Jones”