For Explorers of the World 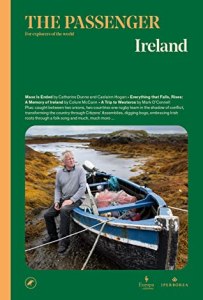 Huginn and Muninn are two ravens from Norse mythology. Sent out by Odin at dawn each day, they return at night to perch on the god’s shoulders, whispering to him whatever knowledge and wisdom they have gathered from every corner of the world. Like Huginn and Muninn The Passenger travels far and wide to bring back the best writing from the countries it visits.

I’ve been reading this over the past week and only meant to read a couple more essays today, but they were so interesting, I kept going and finished it.

Featuring long form essays, investigative journalism, literary reportage and visual narratives, it takes readers beyond the familiar stereotypes to portray a country’s shifting culture and identity, its public debates, the sensibilities of its people, its burning issues, its pleasures and its pain. It was published in the UK by Europa Editions on March 17.

Some Numbers About Ireland

Population (the Republic of Ireland) : 5.01 million

Eurovision Song contest wins : 7 (more than any other country)

The Mass is Ended by Catherine Dunne and Caelainn Hogan

A dual narrative essay written by two women writers from different generations, talking about growing up in Ireland as a woman, how it has begun to transform from an insular, conservative society under the repressive influence of the Catholic Church and how it continued to negatively impact women’s lives long after other countries began addressing such issues. The women discuss the decline of the Church’s influence, the dismantling of a system designed to oppress women and the culture of silence.

A fascinating and insightful article about the natural phenomena of the midland area of Ireland, covered in peatlands, referred to locally as bogs. Initially seen as undesirable and an embarrassment, they then became a source of revenue, economic growth and jobs, not to mention local fuel. Environmentally controversial like many fuel extraction processes, the industry is now in decline and being phased out. The bogs have been found to contain human remains from the Iron Age dating back to between 470 BC.

An Ocean of Wisdom by Manchan Magnan

Photo by Kelly L on Pexels.com

Fascinated by the Irish language and its connection to fishing and the sea, we learn how the decline of a small local fishing industry heralded the decline and disappearance of much of the language. Magnan travelled to the three areas of Gaeltachtai (Irish speaking) to discover locals words and phrases that expressed aspects of the sea, weather and coastal life, linguistic nuances that described a way of life that is disappearing (due to the impact of foreign fishing trawlers) and with it, a form of expression and being.

Like other old tongues, the Irish language has unique ways of expressing things – one example of which is that Irish regards the unseen world as being just as real as the seen, and this is evident in many ofthe phrases, metaphors and colloquial expressions that make up daily speech. So the word ceantar, for instance, means place, region or locality, while alltar is its opposite, the other realm, the netherworld. They exist simultaneously in all places at all times.

Our physical bodies occupy the ceantar, but our minds can easily slip into the alltar. Only a thin veil separates the two realms, and there were always those who could pass from one to the other, as is demonstrated by the word púicín, which refers to a supernatural covering that allows otherworldly beings to appear unseen in this reality.

The efforts to revive and reconnect to the language and the growing awareness of the importance language is to maintaining connection to a culture is encouraging. Losing language is to lose meaning and connection, reclaiming it might well contribute to the country’s healing process.

Sara Baume is know for her two fiction novels, a third Seven Steeples due out in Apr ’22, however if you’ve read her excellent work of nonfiction Handiwork, you’ll know she is a visual artist and loves crafting things, using her hands, sculpting or making things from different materials and they always have a theme.

In Handiwork, she was sculpting birds, but here she writes about the Irish cottage, its evolution and the rise of the Irish villas that were much despised for a period of time. As she spends months creating objects that represent small scale versions of these houses, she reflects on the way Ireland’s built environment has changed.

The idea was to draw a contrast between the grandiosity of the monster mansions and my choice of coarse, everyday materials – the intention being to invent an updated and deeply cynical souvenir.

She visits a reconstructed Irish cottage with Marion McGarry, author of The Irish Cottage: History, Culture and Design (2017), who recounts :

‘the fire was both physically and socially situated in the centre of the house’. Whereas European families routinely gathered around the kitchen table, the Irish would push all of their furniture back against the walls to surround the light and heat of the hearth.

Everything that Falls Must Also Rise – by Colum McCann

The New York based Irish writer reflects on the choice he and many others made to emigrate, what it’s like to return, to become an outsider and be rooted elsewhere, yet still refer to it as home. Full of nostalgia, this one almost feels out of place in the collection, and the enlarged font size stands out almost as a clue to the demographic its likely to appeal to.

At The Edge of Two Unions: Northern Ireland’s Causeway Coast by Mark Devenport

The BBC’s former political editor in Northern Ireland writes about a region hanging in the balance between two Unions, the UK and the EU, torn between fear and opportunity and the distinct feeling of having been abandoned. A century of Northern Ireland, how attitudes and loyalties are evolving and changing with the generations and neighbouring affiliations.

Photo by Luke Webb on Pexels.com

An essay written by the journalist Lyra McKee, who investigated the troubling fact that since the signing of the Good Friday Agreement in 1998, more people in Northern Ireland have committed suicide than were killed during the 30 year conflict.

This was a fascinating read, because it ties in with Kerri Ní Dochartaigh’s Thin Places and when I began to read Lyra’s essay and her questions, I could tell what was coming, because if you’ve read Thin Places and imagined how many other young people have been exposed to what she had been (including being told “you lot had it much easier than our generation” by their parents) and the subsequent suppression of their feelings/emotions, it’s not surprising that there is a significant proportion of the population, particularly in the towns of Belfast and Derry that have suffered the delayed effects of PTSD, without even knowing it.

Her investigation looks at the cause, uncovers existing research and also learns about how trauma survivors pass their behaviours and certain genes (when parental trauma has been experienced prior to conception) to children.

Intergenerational transmission of trauma is not just a sociological or psychological problem, but also a biological one.

I guess there had to be the one that references The Game of Thrones, little more than a guided tour of the locations, an attempt to make a connection between the fantasy of the land imagined by George R.R. Martin (inspired by 15th century civil wars) and the more recent history and reality of a divided land.

Unfortunately, the lens through which he views things around him obscures the actual landscape and barely disguises his disdain for the local guides, while going off on a tangent about a novel relating to the philosophical and aesthetic preoccupations of the Argentinian author Borges.

An excellent and insightful look into the establishment of Citizens’ Assemblies, an invention and intervention by common people to facilitate decision making on important issues that have gone unresolved by politicians for far too long.

This was brilliant, I wasn’t aware that it was these assemblies that had been behind some of the most significant changes and reforms in Ireland’s constitution, and a model that has and is being used elsewhere in Europe, when the population begins to protest and govt wants to listen but is unable to act, here is another way that is even more democratic perhaps, than elected officials, who get tied up with multiple agendas and lose sight of the common citizen, especially those adversely affected by outdated policies and inhumane practices.

The final two essays were about one man’s interest in Irish music (from a perspective of a lifetime living in England) and rugby, neither of which particularly interested me enough to write about here!

Overall, an excellent exploration of the life and times of modern Ireland. Beautifully illustrated and highly recommended.