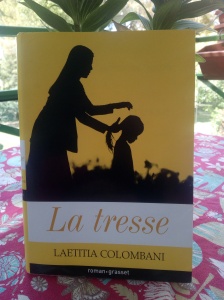 This novel La Tresse by Laetitia Colombani was a birthday gift from a friend, at the time I was given it, it wasn’t available in English, however it has since been translated and published in 2019, available under the title The Braid.

It tells the stories of three women living different lives in three countries, each facing a monumental change, each determined to confront that change in their own way, once they overcome the obstacle that stands in their way, and the discrimination that exists in their society, that causes some not to support their efforts.

It’s written in simple language and has the air of a story being told, almost one I can imagine listening to, or watching on film, rather than being lived in the moment.

There is little description, little of the mundane, there is a superficiality to it – almost fable-like, they don’t seem like real lives, there’s an element of cliché in what they each represent. There is a symmetry to the stories, a correlation that creeps up on the reader as we become aware of the pattern that makes these three situations similar and the ‘tresse’ that will create a connection between them.

India – we meet Smita, a young mother from the lowest caste, who is determined that her daughter will not follow in her footsteps, in the disgusting job she and her mother before her have had to do, she has a plan to enable her daughter to obtain an education, that confronts the expectations of her caste.

Sicilie – Guilia left school at 16 to work in her father’s atelier, as he lies unconscious in hospital she discovers he was hiding something from them and it is she who must save the day – through an arranged marriage as her mother suggests – or by stepping up and being courageous, helped by an outsider the community doesn’t accept.

Canada – Sarah is an ambitious lawyer and mother, her private life exists behind a wall of her own making, one she attributes her success to, a wall that comes crumbling down when an illness breaks through it and exposes her.

All three women take on their respective challenges despite the discrimination and obstacles and each will find solace in something unexpected. 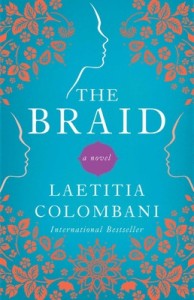 I hesitated to read this for some time, just because it was in French, but I was pleasantly surprised by how easy it was to read and how little I had to look up new vocabulary. I enjoyed it when I did as I discovered new words and scribbled them in pencil in the margins. And then how I come across those words in the external world, resulting in me thinking I really would enjoy to read more of these works that are available in French but not yet in English.

Despite the satisfactory linguistic journey, I’m not sure it is a book I would have picked up normally. It touches on subjects that warrant further exploration, that are a little too conveniently side-stepped or imagined to be easily resolved, which left a quiet discomfort in accepting the outcomes proposed. The author chooses not to delve into the significant issues raised and instead provides this three pronged tale that ties things up a little too neatly at the end.

Any one of these stories could have been developed, their issues explored to raise awareness and encourage discussion; ignoring them feels like a mild form of cultural appropriation. I tried to find out whether the author had a personal connection to any one of the cultures she uses in the novel, but apart from visiting the countries, there doesn’t appear to be.

Yesterday I was in Marseille and visited a number of fabulous exhibitions in the MuCem (Museum of Civilisations of Europe and the Mediterranean) and was inspired by what I encountered there to wish to read more French books, like Frères Migrants by Patrick Chamoiseau, La pesanteur et la grâce by Simone Weil though they may challenge my comprehension. It is a city with a rich history and a wonderful cultural offering that I shall explore more. Perhaps I may try to share some of that here.

5 thoughts on “La Tresse (The Braid) by Laetitia Colombani (France)”