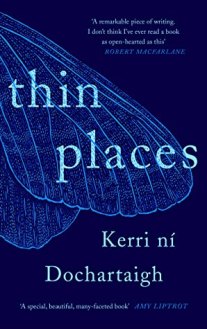 Thin Places is something of an enigma, when I bought it, I thought it was in the nature writing genre, the inside cover calls it a mix of memoir, history and nature writing – such a simplistic description of the reading experience, which for me was something else.

Heaven and earth, the Celtic saying goes, are only three feet apart, but in thin places that distance is even shorter. They are places that make us feel something larger than ourselves, as though we are held in a place between worlds, beyond experience.

This book is a kind of cathartic experience of being inside the experience of someone who has experienced trauma, who has yet to awaken from its implications, or be conscious of its effect – but who by the end will by necessity awaken to it, because it can no longer be contained inside the mind, the body and for the good of the soul, it must be expressed, broken down, if there is to be any change of coming out the other side.

Even as a child, I could see no way of staying in my hometown. The edges of the broken and breaking city never quite held themselves in place, and my own family life mirrored those fractures.

So the first part of the book I can only describe as “being in the fog”. We know Kerri ní Dochartaigh was born in Derry on the border of the North and South of Ireland, at the height of the troubles, that her parents were of mixed heritage, a Protestant father and Catholic mother;  the family existed in the oftentime dangerous in-between, safe in neither space or only temporarily, always moving, never truly belonging.

We have a somewhat difficult relationship with the word ‘tradition’ in Ireland, particularly in the North. The way that religion has latched itself onto the politics of this land has left many people with no desire to look at the imagery of their ancestors; the story of their past. We have lost, broken, murdered, burned, stolen, hidden and undone – all in the false name of tradition. Lives, places and stories have been ripped out by their roots because ‘that’s how it has always been’. I wonder, I wonder so very much these days, what wealth of imagery and meaning was lost when we became so focused on our differences here, that we buried the things that had once tied us together, the things that might still know a way through, for us all.

Though we are told this, the uninitiated reader doesn’t really understand what that means, how it actually manifests on the human level, on a day to day basis – until she arrives at the point where she realises, she needs to confront the reality of the things that happened – because she is losing it – and finding it harder and harder to function in the bubble of denial that allows her to go about her day, to work, to live.

The past, present and future all seemed to blend into one, and every single part of the story held sorrow that I couldn’t get rid of, no matter how deeply I try to bury it. So many different things – situations, times of year, people – made the bad things rise up from inside to bite me again. Triggers, I know that now. It left me feeling scared, hollowed out and with no control over any of it, not really knowing how to make it – any of it – stop.

Photo by Ducky on Pexels.com

Only after finishing Part 1 Blood and Bone did I comprehend what I was reading, a woman’s life from childhood up to the age of 28 striving to not give in to the effects of trauma, in the opening chapters, she alludes to those things, though is unable to write directly about them, until realising the nightmares will never stop if she doesn’t, the numbing eventually worse than the pain.

And so she begins to share the events. And it’s tough to read, to absorb as we imagine the magnitude of the effect these events must have had on a child, on an adolescent, a young adult. But what courage, to make that decision, to visit that dark place, to express those thoughts, recount those events, relive the disappointments, feel again the sense of abandonment, to trust that writing about it might bring one towards healing.

While there are those moments of how nature and the many metaphors and symbolism of it kept her sane, this is more about the nature of mind and the necessity of finding and/or making meaning in navigating the troubles of life, in order to overcome past hurts, reconcile traumatic events and find a way to live again, to believe in hope, to elevate one’s self-worth and be able to function in a relationship.

Photo by Leigh Heasley on Pexels.com

It is a tough and unrelenting read, that at times I needed to take a break from, but it is one that we as readers are privileged to gain insight from, because Kerri ni Dochartaigh could very easily not be here, and yet she is – and I like to believe that in part that is because the sharing of her experience and path to healing are an important part of her soul’s purpose in this life.

This extraordinary book is part of her life’s work, she has found a way to articulate to the many, the terrible destructive effect of divisiveness , prejudice and intolerance on young people, the effect of not feeling safe during childhood and adolescence and the difficulty of becoming something other than what you knew growing up – of learning to trust, to love, of connecting to the natural environment, learning a near lost language that connects the Irish to their environment and dwelling in just being.

Naming things, in the language that should always have been offered to you, is a way to sculpt loss. A way to protect that which we still have.

Born in 1983, in Derry-Londonderry at the border between the North and South of Ireland. She read English Literature and Classical Civilisation at Trinity College Dublin and trained as a Waldorf teacher in Edinburgh. She taught in Edinburgh and Bristol, before returning to Ireland in her early thirties.

She writes about nature, literature and place for the Irish Times, Dublin Review of Books, Caught by the River and others. She has also written for the Guardian, BBC, Winter Papers. Thin Places was highly commended by the Wainwright Prize for Nature Writing 2021.