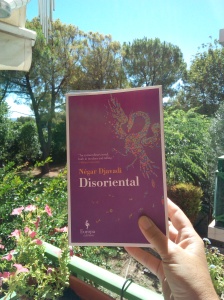 I could end my review right there, those were the words I tweeted not long after I finished Négar Djavadi’s Disoriental while I was still in the moment of coming to the end of an excellent story of an immersive experience I wasn’t ready to be done with. It was a five star read for me, but I’ll share a little more of the experience to help you decide if it’s for you or not.

The novel is a dual narrative, set in the present and the past, where the protagonist – who for some time is nameless, with little said to explain how she came to be here – is sitting in a fertility clinic, waiting for her appointment. This immediately creates questions in the reader’s mind, as it is made clear there is something unusual about the situation, that she is taking a risk to even be there. This contemporary narrative, slowly builds the picture of who she is and the  circumstance she is in.

This interminable waiting creates an opening for her to reflect and remember, thus interspersed between what takes place in the present, is the story of her family, a long line of Sadr’s, beginning with her parents Sara and Darius, forced to flee Iran, who came to France when she and her two sisters were of school age.

The narrating of family stories, taking us back as far as her great-grandfather Montazemolmolk with his harem of 52 wives, serves to provide context and an explanation for why certain family members might have behaved or lived in the way they did, helping us understand their motives and actions.

The daughter Nour, born with unusual piercing blue eyes, her mother dying in childbirth, the man obsessed with making her his wife, her reluctance to go out being the object of unwanted attention, her children who desire to be free of restriction, the reading of the coffee cups, predicting the sex of the child of a pregnant woman; Uncle Number Two and his secret.

Darius, the timid elder son, sent to Cairo to study law, abandons his studies and pursues a doctorate in Philosophy at the Sorbonne. Eventually he returns to the family, changed by his studies and experiences and though quiet in person, wields a mighty sword through his journalistic pen and letters to a political regime he detests and chooses not to ignore.

It is a story that spans a changing, turbulent time in Iranian history, one that travels through highs and lows, for while the passionate intellectual is free to express their opinion and brings no harm, they continue to live within their culture, family and be an active part of their community and society. But when freedom of expression becomes a danger to the individual, the sacrifices that are made stifle and silence them, but don’t always make them safe. Life in exile, without the connections to friends, family, neighbours, reduces these adults to shadows of their former beings, unable to truly be themselves in a foreign culture.

I highlighted so many great passages in reading, but I’ve already passed the book on to someone else to read, so can not share them here yet. It is a reminder of another era, of people who had rich, cultural and intellectual lives, of families who fled persecution, not because of war, but because of their intellectual and philosophical activism and of how much is lost, when a new generation grows up within a culture no longer connected to their past, to their heritage and worse, in a country that has been subject to the propaganda of the media, and perceptions of that culture are tainted by the agenda of politicians and parties, and what they wish their populations to believe about foreign cultures.

I absolutely loved it, I liked the slow drip revelation of what this young woman’s life had become, having been severed from her country and community of origin and the colourful, abundant richness of the family history and culture, which while separate from her life today, existed somewhere deep in her psyche, in her genes, and in those non-genetic aspects we inherit from previous generations even without knowledge of what has passed.

It is as if she had a crystal ball to look back through the years, through lives she hadn’t personally experienced and discovered events from the past that created an aspect of who she was and would in turn, be passed on and live deep within the yet unborn child she desires to conceive.

Buy a Copy of DisOriental via Book Depository