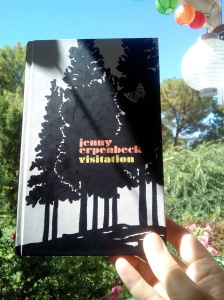 I’ve attempted to read Visitation about four times and never succeeded in getting past the first few chapters, but this year I persevered as I felt I hadn’t given it a fair chance.

Now that I’ve finished it, I realise I held unrealistic expectations when I first came across it. I bought my hardcover version in Daunt Books in Marylebone on a visit to London in 2010, I was aware of it after having read a review in the Guardian, this was in the early days when I was newly discovering works by writers in translation.

Jenny Erpenbeck was being hailed as “the rising star of the German literary scene” and her work described as “one of the most striking and original new voices in German writing.” I wanted to discover what that meant, to read it and feel it. Naive. I wasn’t yet able to discern in the little explored world of translations, which voices I would lean towards and appreciate, or to value my reading perceptions.

I began this book a few times and the striking and original wasn’t happening. I shouldn’t have read those blurbs, I should have read it without any expectation and then moved on to her next books, which have gone on to develop a wider audience, won prizes and further established her as that which that was predicted.

Visitation is a veiled narrative that shows a little of the lives of a few people who lived alongside a lake that was formed about thirteen thousand years, whose origins might be traced back to a glacier from twenty-four thousand years ago. Beginning the book with this geological origin reminds us of our insignificance and the inevitability of change and transformation.

“As the day is long and the world is old, many
people can stand in the same place, one after the other.”
– Marie in Woyzeck, by George Buchner

The first chapter is entitled ‘The Wealthy Farmer and his Four Daughters’ and tells of the local mayor, who comes from a long line of men, all who have been Mayor of the village, the chapter tells of many traditions, rituals and superstitions, of what is meant to be, to happen, to the point of extreme ridiculousness, as if thousands of years of rituals have piled up on top of one another, awaiting the seismic event that will topple them all. Because he has only procured girls, the inevitable is indeed waiting to happen, for there will be no new Mayor from his family and change is coming to Brandenburg. History as we know is about to impact this family and others, people are going to have to leave and strangers are going to arrive.

When they returned to Germany, it was a long time she and her husband could bring themselves to shake hands with people they didn’t know. They had felt a virtually physical revulsion when faced with all these people who had willingly remained behind.

In between the chapters with titles encompassing their time there, like ‘The Architect’, the Architect’s Wife’, ‘the Red Army Officer’, ‘the Subtenants’, ‘the Girl’, ‘the Writer’, ‘the Visitor’, ‘the Childhood Friend’, are the chapters of ‘The Gardener’, the one closest to nature, the one consistent thread that exists throughout all the others, as the others succumb to the effects of the era in history they embrace – pre-war(s) to post war Germany, is the man with no name, who looks after everything, but who is a cycle of nature himself, so that by the end, as his (in)ability changes, so too do others that come in have to either take up his responsibilities or allow things to fall into neglect.

Laced with melancholy, it offers snippets of lives of those who dwell(ed) near this lake, wood, village – the compromises, the passing of seasons, the building, destroying of things, relationships – why strangers are both spurned and revered and always The Gardener, the one who tends, who observes, who slowly wilts, forcing others to adapt.

While I appreciate what it attempts to do, I didn’t find the novel engaging, that melancholy combined with the veiled effect, of keeping the reader at a distance from the characters, of only seeing so much, instilled in it for me, a kind a quiet dread, a feeling drained of hope, as if there was no escape from a dire inevitability, no matter what it was. The psyche of the era it was set in perhaps; if so, it succeeds in creating an atmosphere of a country, its people and the spectre of its past.