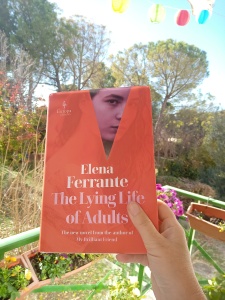 As I’m currently reading her most recent novel, The Lying Life of Adults published in September 2020 and being a fan of many of her books to date, including My Brilliant Friend, The Days of Abandonment, Troubling Love and Frantumaglia, I was interested to learn thanks to the publisher Europa Editions that:

Elena Ferrante has compiled a list of novels close to her heart, all by women authors, and exclusively for Bookshop.org, the new alternative to Amazon for socially conscious shoppers wanting to support high street bookshops when they shop online.

Given the type of characters and narratives Elena Ferrante is known for, her stories usually set in or have a connection with the working class neighbourhood of Naples and concern female protagonists coming to terms with their situation, whether they are girls, young mothers, grieving daughters or an adolescent trying to make sense of the adult world, I thought it would be interesting to know which authors she gravitates towards, who she has been influenced by and being Italian, she is likely to have read books that might be outside the common anglo reading mainstream.

I’m sharing the list here as an easy reference for me to look at and will link any of the titles I have already read to my reviews. I have read 13 of the titles, though only reviewed six of them.

I’ve also added the countries the author is associated with, either by birth and/or nationality, as I find that helpful, it being one of the criteria by which I decide whether to read a book or not – to avoid always reading works from the same cultural influence.

The list is quite Euro-American influenced, with only one African representation (or two if you count Doris Lessing), so while not quite as diverse as what I like to read, it’s an interesting exploration of the female pysche through female literature of the ages from those cultures represented.

I did also read that the list was limited by what is available in English and by what is available from the Bookshop, so there are titles that haven’t been shared because either they haven’t been translated into English or are not available. I wish they had been included because that might have sparked an even more interesting debate about the lack of availability of works in other languages and to hear the chorus of readers who might have helped persuade publishers to do something about that.

Juliana at The Blank Garden has more to say about that in her critique of the list (see the link to her blog post below), she is very widely read across languages, a wonderful reviewer and has read 28 of the titles. I’ll be referring to her favourites of Elena’s favourites as a further guide!