Eva Sleeps is a thought-provoking novel that takes the reader on multiple journeys, as the narrative slowly unravels the mystery that connects Eva, her mother Gerda and Vito.

The brown parcel travelled backward along the road it had taken to arrive at that spot: two thousand, seven hundred and ninety-four kilometres in total,there and back.

Eva Sleeps is a reference from Paradise Lost and a quote in the book that is repeated both in the prologue (above) and at the end of the novel, referring to the delivery of a package that arrives from the postal worker for Eva, one that her mother rejects, saying it is unwanted. It is an indirect introduction to the three main characters, introducing a connection that will be alluded through throughout and revealed  by the end after we too have travelled that same journey the package takes.

“Let Eve (for I have drench’d her eyes, Here sleep below, while thou to foresight wak’st.”

We meet Eva as she is met at Munich airport by Carlo, he will drive her the three-hour journey across two borders to her home in Sudtirol/Alto Adige in a German-speaking part of northern Italy. It is the beginning of the Easter holiday and the beginning of a longer journey she will make when she receives the call from Vito telling her he doesn’t have long to live and that he’d like to see her again.

Eva’s chapters are titled Kilometre 0, Kilometres 0-35, up to Kilometre 1397 ending with Kilometre 0, Today. These chapters contain her thoughts and observations as she makes the 1400km journey towards the dying Vito in Sicily.

The interposing chapters are Gerda’s story and they are labelled by the years within which her story is narrated, beginning in 1919, a year in which:

“…the peace treaty was being signed in Saint-Germain, with which the victorious powers of the Great War – France, especially – wishing to punish the dying Austrian Empire, assigned South Tyrol to Italy. Italy was very surprised. There had always been talk of liberating Trento and Trieste, but never Bolzano – let alone Bozen. It was perfectly logical. South Tyrolean’s were German people, perfectly at ease in the Austro-Hungarian empire, and didn’t need anyone to liberate them. Even so, after a war that had certainly not been won on the battlefield, Italy ended up with that stretch of the Alps as their unexpected booty.”

It was also the year her father inherited the family home after the death of his parents. The fate of the family would forever be affected by that political decision, for all those native to the area, who overnight were ruled in a language and culture foreign to their ways, making them like strangers in their own country, as people from the poorer southern parts of Italy were sent to live among them, in an effort to try to make these tall, blond people more Italian.

Gerda’s family is poor and as soon as she is old enough she is sent out to work, she works in the kitchen of a large hotel and alongside her striking beauty, develops a talent for creating delectable local dishes, twin characteristics that will lift her out of poverty and give her a measure of independence, much required after her father disowned her upon the arrival of Eva. She finds a way to continue working without losing her daughter.

Alongside the enthralling life of Gerda, who is the most well-rounded and well-known of the characters we follow, we are exposed to the context of the freedom fights of Alto Adige, those who protested against the cultural white-washing, labelled terrorists for their protests when they turn violent.

“Until a few years ago, when you said you were a German speaker from Alto Adige, they thought you were a terrorist. At the very least they’d ask: but why do you people hate Italians so much?

Then things changed. In the weekly supplement of the newspaper, a few months ago, the front cover was devoted to separatist ethnic movements in Europe. It mentioned:

Eva Sleeps is a provocative novel of journeys, of connections and contradictions across cultures, of love in its many forms, of struggles and conflicts, identity and how we are connected to place. 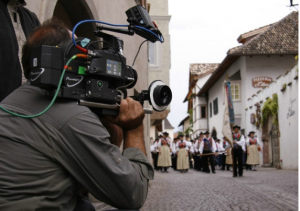 Told in a compelling narrative while backgrounding the fascinating and little known history of this part of northern Italy, it does what the historical novels often do best, increase our historical knowledge, while highlighting the ricochet effects political decisions can have on humanity, on innocent civilians, making us understand why the oppression that results turn some towards violence and others to seek love, as ways to dull the pain.

The novel is being made into a film.

Note: This book was kindly provided to me by the publisher, Europa Editions.