Juan Francisco Manzano was born into the household of a wealthy slave-owner in Cuba in 1797.

We know details about the early years of his life thanks to a collection of his autobiographical notes being smuggled out of Cuba to England, where they were published by abolitionists who hoped to raise support for their cause.

He spent most of his childhood close to a woman who insisted he call her Mama, despite the presence of his own mother Maria del Pilar.

how he must feel in that other home

where he learns the words

now he’s a parrot, not a poodle

repeats every sound he hears

from every book in his godmother’s library

Though he wasn’t formally educated, he had a gift for language and poetry and despite the severe punishments he endured for continuing to express joy and suffering through his words.

The other day he recited words so completely new

that I understood the verse

begged from the godmother’s books 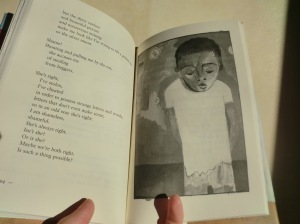 and then he went on

I only caught a  few fragments

of his rhyme of delight,

something about a golden beak

The woman who kept him initially allowed his mother and any unborn children to buy their freedom and promised Juan freedom on her death. It was a promise rescinded by those still living after the woman’s death, though his mother continued to try to purchase his freedom without result.

Don’t cry, my other mother, the real one, whispers

this is the end

now you are free!

But I am not

and then to La Marquesa

instead of the long-promised

The Marquesa is a bitter, cruel woman who even when inflicting the most grotesque punishment on Juan, still finds reason to blame him for her own suffering.

Some people can never be satisfied.

Nothing is ever enough for him.

I have to tell the overseers to teach

locking his ankles in the stocks

Or tying him to a ladder laid out on the ground

face down, mouth down

so he cannot speak

except to count his own lashes out loud.

And even when this is done nine days in a row

still he bleeds and weeps,

trying to show me

that he has won

he has triumphed once again

he has proven that he can still

To find out what happens, read this wonderful story of poems, a beautiful collection and tribute to a life of an exceptional poet.

Juan Francisco Manzano didn’t stop producing spontaneous poems until very late in his life, after being arrested for trying to stir up a slave rebellion through his poetry and spending a year in prison. That experience silenced his voice forever.

His work is astonishing, bold, thought-provoking, intelligent and lengthy. Once you begin reading it you can’t stop and I can see why both his work and his story haunted Margarita Engle for so long. That she has been able to condense his experience and thoughts into this humble volume is a gift to readers young and old.

To read the English translation of some of Juan Francisco’s original work, click on this link or the image below:

Poems by a Slave in the Island of Cuba, Recently Liberated;
Translated from the Spanish, by R. R. Madden, M.D.
With the History of the Early Life of the Negro Poet, Written by Himself

Margarita Engle is a Cuban-American poet who has published a number of books for young readers in free verse and prose poetry. She chooses interesting subjects that make me want to read everything she has written, they are an introduction to explore further the subjects she introduces. The titles alone are seductive.

The artwork in all her books is fantastic, this work illustrated beautifully by Sean Qualls.

I have read and reviewed The Wild Book, based on the life of the author’s grandmother who struggled with dyslexia, and she has other tempting titles such as:

The Surrender Tree: Poems of Cuba’s Struggle for Freedom

The Firefly Letters: A Suffragette’s Journey to Cuba

10 thoughts on “The Poet Slave of Cuba, a biography of Juan Francisco Manzano by Margarita Engle”