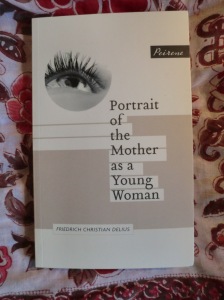 This 117 page long single sentence in a novella, is the third and final book in the Peirene Press series entitled Female Voices: Inner Realities.

If you missed the first two, you can read my reviews here:

In my previous review I mention the enticing page at the beginning of all Peirene books where publisher Mieke Ziervogel shares what drew her to choosing this book for translation into English.

Here is a glimpse at what she says about this book: 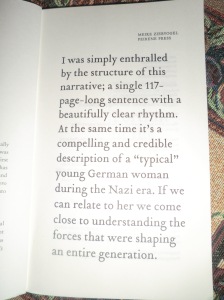 The book is set in Rome in 1943 when Italy and Germany remain allies during the second world war. The narrative takes place during an afternoon stroll as our young woman on the brink of becoming a mother is walking towards a Lutheran church where she will attend a classical concert.

Eight months pregnant, she is the young wife of a German solider and had been waiting for him to join her in Rome; after briefly reuniting, one day later he is redeployed to Tunisia. Alone again so soon, she walks to the Bach concert thinking about how her life has changed now as a married woman and how distant she feels from everything around her. She recalls recent memories of the short time spent with her husband wondering whether he will return to her safely or not. 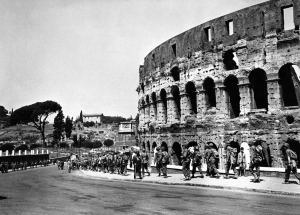 Being outside her own country, without her husband and not yet active in her role as mother, it is as if she becomes more acutely aware of who she is, there is little to distract her and she often prefers to keep to herself.

Even the friendship that naturally developed with her room-mate Ilse, she keeps in check, worrying about the implications of being associated with those whose views are more vociferous than her own, she who wishes for a quiet life.

she worried about Ilse, who rarely had a good word to say about authority that was

fortunately Ilse had broken off at this point, perhaps out of consideration for her, because she,

the younger woman, who was always silent when national and political questions were discussed, had just for a second wondered why it was necessary to hate the British and Americans, and in the same instant this forbidden thought made her feel guilty, confused and horrified,

She is not despondent for she has a deep faith and whenever her thoughts turn towards herself she recalls that war is God’s most difficult trial, lamenting:

“God, who is love, delivers this all to us, that it may benefit us in the end,

for it was un-Christian to shed tears for one’s own misfortune and to forget the far greater misfortunes of others, the joys of life were limitless”

Her thoughts enable the reader to understand her reluctance to do anything that might jeopardise what slim chance she may have at a normal life, she dislikes that by virtue of being foreign she already stands out, the opposite of what might give her peace of mind.

Portrait of the Mother as a Young Woman is a spellbinding portrayal of one woman’s internal conversation, her method of coping with the strangeness of her environment, talking herself into maintaining a calm state of mind, rationalising why they have found themselves in this situation. Though it is a trial for her, it is not enough to prevent her dreaming of the life she wishes they were living, something that seems increasingly like a fantasy, as the probability of her husband’s return grows slimmer as each day passes.

Poignant in its simplicity, expressing that universal feminine desire for love in a safe, nurturing environment.