From a longlist of 79 novels, including 30 novels in translation, the committee has shortlisted six novels. These novels were all nominated by libraries around the world. Celebrating 27 years, this award is the world’s most valuable annual prize for a single work of fiction published in English, worth €100,000 to the winner.

Below are the shortlisted titles with judges comments and the two I have read linked to my reviews:

– New Zealander Catherine Chidgey opens a new chapter of Holocaust literature as she tells the story of Greta Hahn, who is the wife of a concentration camp manager and doesn’t know – then doesn’t want to know – what goes on behind the fence.  When her Nazi husband becomes convinced that only a prisoner can save Greta from dying of cancer, Dr. Weber enters her parallel universe at the edge of the camp.  The prisoner-doctor treats Greta because he hopes it will help his Jewish wife and their young daughter who have been forcibly separated from him and sent further East.  Slowly he bursts Greta’s bubble of oblivion and she is forced to confront the horror to which she has been an accomplice.

Chidgey expertly choreographs this desperate dance of death as the Allied liberating army comes closer and closer, and surviving long enough to be freed becomes the ultimate challenge. Remote Sympathy, harrowing but ultimately hopeful, is a passionate warning against the dangers of our wilful ignorance in the face of oppression which is, sadly, of urgent relevance today, and every day.

At Night All Blood is Black by David Diop (French) Translated from the French by Anna Moschovakis  Published by Pushkin Press Nominated by Bibliothèque de Reims, France

– At Night All Blood is Black is a carefully crafted, heart-wrenching, passionate, and engaging story about the insanity of war and its devastating toll on humanity. Told from the perspective of Alfa Ndiaye, a 20-year-old Senegalese who, like his friend, Mademba Diop and many other young West Africans were conscripted by European imperial powers – in this case, France – to fight in World War I. The novel raises fresh concerns about the issues of war, humanity, identity, sexuality, racism, violence, and colonialism as it explores strong emotions like love, apathy, fear, and indignation towards war.  The plot hinges around the gruesome death in battle of Mademba, and Ndiaye’s refusal to carry out the “mercy killing” for his friend.  From that point onward, Ndiaye begins to spiral towards insanity, consciously becoming the “dämme”, “demon” or “savage” his European trench-mates think him to be.

Alternately horrific and lyrical, the novel moves back and forth between the Senegalese village of Ndiaye’s youth and the brutal chaos of the trenches.  For such a slim book, Diop’s novel manages to attain a kind of epic scale, sweeping back and forth between Africa and Europe, between world-historical events and village life.  Holding all of this together is the narrative voice of Ndiaye.  Diop combines traditional African tropes with modern literary devices, giving the novel a rhythmic quality, as Ndiaye repeats phrases like “God’s truth”, “more-than-brother”, “I swear to you”, “I know, I understand”, whispering gently in our ears as he carries us into the dark heart of twentieth-century history.

– Akwaeke Emezi’s novel opens with a chapter of only one sentence: “They burned down the market on the day Vivek Oji died.”  From that first sentence, we are immersed in contemporary Nigeria in all of its complexity, where tight family and community bonds are woven into the submerged stories of gay, bisexual and transgender people, and where groups such as the ‘Nigerwives’ (foreign-born wives of Nigerian men) form one of the cultures that make up the mosaic of Nigerian society.  Emezi’s novel manages to balance an unflinching realism with something of the quality of a folktale or a myth.  On one level, this is a very directly told story of two people coming of age and grappling with sexualities that struggle to find expression.

As readers, we encounter these lives almost like “a stack of photographs” being handed around at a wake (to use an image from the novel).  At the same time, The Death of Vivek Oji is shot through with mythic elements.  Oji is born on the day of their grandmother’s death, and there is a sense in which her spirit inhabits the person they will become.  The burning market foretold in that opening line is both an entirely credible part of the novel’s world, and a kind of symbolic crucible, out of which a new identity is born.  “I was born and I died”, Oji tells us at the novel’s end.  “I will come back.”

– Danielle McLaughlin’s novel is set in Cork. Its curator protagonist Nessa , is organizing a retrospective of the work of a Scottish-born sculptor, Robert Locke. Locke established himself in West Cork, at the end of the 1960s, after years of wandering. Locke’s studio and his sculpture ‘Venus at the Hotel Negresco’, known colloquially as ‘The Chalk Sculpture’ will become a permanent exhibit in the museum where Nessa is employed. Nessa has worked long and hard for this event and has nurtured a relationship with Locke’s widow Eleanor and daughter Loretta. Women attribute healing powers to the statue, fetishizing it as a cure for infertility. At a public lecture on Locke’s work, another woman, Melanie Doerr, comes forward and tells Nessa that she was the model for the monumental piece, claiming that Locke spent a period of time with her in 1972. These are lost months in Locke’s biography, when Locke disappeared without trace, turning up later, like an unkempt beggar, on Eleanor’s doorstep offering neither explanation nor apology. While Nessa’s professional life revolves around the mystery of Locke’s disappearance and the veracity of Melanie Doerr’s claims, Nessa’s own personal life is in turmoil. She struggles with the aftermath of her husband’s affair, their threadbare finances, and their teenage daughter’s behavioural problems.

McLaughlin creates a compelling portrait of a life spent in pursuit of art and happiness. She summons up contemporary Cork, the universality of marital woes, and the everyday frustrations of middle-age in elegantly chiseled prose.

The novel unfolds as a constant conversation and interaction between the seven selves that make up Mashkawaji. Simpson skilfully brings each of the characters to life on the page so they feel real and not just metaphorical.  Ultimately, the novel provides powerful insight into how Indigenous people have tried to sustain their identity and their old traditions as they navigate living in the modern world. This is a unique, charming and lyrical novel that combines poetry song and prose. 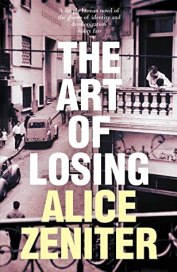 – Deriving its title from the piercing first line of Elizabeth Bishop’s arch poem “One Art”, The Art of Losing follows three generations of an Algerian family from the 1950s to the present day—as they progressively lose, in the fog of conflict and post-colonial transition, their country, their roots, and their innocence. The narrative wings its way from the contested highlands of Northern Algeria to a French refugee camp, to the streets of Paris and back, borne forward by a cast of nuanced characters: from the patriarch Ali to his granddaughter Naïma, heir to a new digital age in which old prejudices and presumptions persist. Each is profoundly human in their passions, griefs, vanities, contradictions and silences. The family’s journey unspools in a deft weave of fiction and research, as the narrator fills in with compassion and imagination what the clan’s muteness about the past have refused to yield.

Symphonic in historical and emotional scope, the novel is by turns infuriating, unflinching, wry, recalcitrant, sensual, aporetic, courageous. It offers insights at every scale, from the national and the individual, about the fluid nature of identity; how our relations to place and to each other situate and perhaps free us. Refusing easy answers, pat politics and cultural caricatures while acknowledging their presence and seductive power in our time, The Art of Losing is a loving and clear-eyed sifting of the stories we tell ourselves.

The winner will be announced on Thursday 19th May during the International Literature Festival Dublin which runs from the 19th to the 29th May 2022.