The Man Booker International Prize used to appear every two years and the authors nominated were not just writers in translation, they were from outside the UK and a nomination was for their body of work, not for one recently published book. That prize, for a translated work of fiction was called, the IFFP (Independent Foreign Fiction Prize).

Now the two have joined together, with the format being the same as the IFFP prize and the name Man Booker International.

“Fiction in translation is flourishing: in these times when walls are being built, this explosion of brilliant ideas from around the world arriving into the English language feels more important than ever.” Nick Barley, Chair

Last year the prize was won by the South Korean author Han Kang and her translator Deborah Smith, for The Vegetarian. 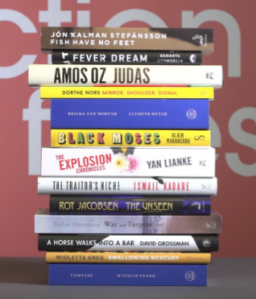 The 2017 longlist comprises 13 titles (from 126 submissions) translated into English from 11 languages: (summaries extracted from the Man Booker Prize website), the shortlist will be announced on April 20 and the winner on June 14th.

Compass by Mathias Enard (France), (tr. Charlotte Mandell) – As night falls over Vienna, Franz Ritter, an insomniac musicologist, takes to his sickbed with an unspecified illness and spends a restless night drifting between dreams and memories, revisiting important chapters of his life: his ongoing fascination with the Middle East and his numerous travels to Istanbul, Aleppo, Damascus and Tehran, and writers, artists, musicians, academics, orientalists, and explorers who populate this vast dreamscape. An immersive, nocturnal, musical novel, full of generous erudition and bittersweet humour, Compass is a journey and a declaration of admiration, a quest for the otherness inside us all and a hand reaching out.

Swallowing Mercury by Wioletta Greg (Poland), (tr.Eliza Marciniak) – Wiola lives in a close-knit agricultural community in 1980s Poland. Wiola’s father was a deserter but now he is a taxidermist. Wiola’s mother tells her that killing spiders brings on storms. Wiola must never enter the seamstresses’s ‘secret’ room. Wiola collects matchbox labels. Wiola is a good Catholic girl brought up with fables and nurtured on superstition. Wiola lives in a Poland both recent and lost in time. Swallowing Mercury is about the ordinary passing of years filled with extraordinary days. In vivid prose filled with texture, colour and sound, it describes the adult world encroaching on the child’s. From childhood to adolescence, Wiola dances to the strange music of her own imagination.

A Horse Walks Into a Bar by David Grossman (Israel) (tr.Jessica Cohen) – In a comedy club in a small Israeli town, an audience arrives expecting an evening of amusement and see a comedian falling apart on stage; an act of disintegration, a man crumbling before their eyes. They could get up and leave, or boo and whistle and drive him from the stage, if they were not so drawn to glimpse his personal hell. Dovale Gee, a veteran stand-up comic – charming, erratic, repellent – exposes a wound he has been living with for years: a fateful and gruesome choice he had to make between the two people who were dearest to him.

War and Turpentine by Stefan Hertmans (Belgium), (tr.David McKay) – Shortly before his death, Stefan Hertmans’ grandfather Urbain gave his grandson a set of notebooks containing detailed memories of his life. He grew up in poverty around 1900, the son of a struggling church painter who died young, and went to work in an iron foundry at 13. Afternoons with his father working on a church fresco were heaven; the iron foundry an inferno. During WW1, Urbain was on the front line confronting the invading Germans, haunted by events he can’t forget. War ends, he marries, then tragedy. Urbain recovers and like the obedient soldier he is, dutifully fulfils the expectations of family. Observations of a marriage with a sad secret at its heart, consolation found in art and painting.

The Unseen by Roy Jacobsen (Norway), Don Bartlett (tr.Don Shaw) – Ingrid Barrøy is born on a family owned island, her father dreams of a jetty to connect them to the mainland, but closer ties to the wider world come at a price. Her mother has her own dreams – and a question Ingrid must never ask. Island life is hard, so when Ingrid comes of age, she is sent to work for one of the wealthy families on the coast. But Norway too is waking up to a wider world, a modern world that is capricious and can be cruel. Tragedy strikes, and Ingrid must fight to protect the home she thought she had left behind.

The Traitor’s Niche by Ismail Kadare (Albania), (tr.John Hodgson) – At the heart of the Ottoman Empire, in the main square of Constantinople, a niche is carved into ancient stone. Here, the sultan displays the severed heads of his adversaries. People flock to see the latest head and gossip about the state of the empire: the province of Albania is demanding independence again, and the niche awaits a new trophy. Tundj Hata, the imperial courier, is charged with transporting heads to the capital – a task he relishes and performs with fervour. But as he travels through obscure and impoverished territories, he makes money from illicit side-shows, offering villagers the spectacle of death. The head of the rebellious Albanian governor would fetch a very high price.

Fish Have No Feet by Jon Kalman Stefansson (Iceland), (tr.Phil Roughton) – Keflavik: a town that has been called the darkest place in Iceland, surrounded by black lava fields, hemmed in by a sea that may not be fished. Its livelihood depends entirely on a U.S. military base, a conduit for American influences that shaped Icelandic culture and ethics from the 1950s to the dawn of the new millennium. It is to Keflavik that Ari, a writer and publisher, returns from Copenhagen at the behest of his dying father, two years after walking out on his wife and children. He is beset by memories of his youth, spent or misspent listening to Pink Floyd and the Beatles, fraternising with American servicemen – who are regarded by the locals with a mixture of admiration and contempt – and discovering girls. There is one girl in particular he could never forget – her fate has stayed with him all his life.

The Explosion Chronicles by Yan Lianke (China), (tr.Carlos Rojas)  – With the Yi River on one side and the Balou Mountains on the other, the village of Explosion was founded a thousand years ago by refugees fleeing a volcanic eruption. But in the post-Mao era, the name takes on a new significance as the rural community grows explosively from a small village to a town to a city to a vast megalopolis. Behind this rapid expansion, three rival clans linked together by a web of ambition, madness and greed,  transform their hometown into a Babylon of modern times – an unrivalled urban superpower built on lies, sex and thievery.

Black Moses by Alain Mabanckou (France), (tr.Helen Stevenson) – 1970 in the People’s Republic of Congo, a Marxist-Leninist revolution is ushering in a new age. Over at the orphanage on the outskirts of Pointe-Noire where young Moses has grown up, the revolution has strengthened the reign of terror of Dieudonné Ngoulmoumako, the institution’s corrupt director. So Moses escapes to Pointe-Noire, where he finds a home with a larcenous band of Congolese Merry Men and among the Zairean prostitutes of the Trois-Cents quarter. But the authorities won’t leave Moses in peace, and intervene to chase both the Merry Men and the Trois-Cents girls out of town. All this injustice pushes poor Moses over the edge. Could he really be the Robin Hood of the Congo? Or is he just losing his marbles?

Bricks and Mortar by Clemens Meyer (Germany), (tr.Katy Derbyshire) – Bricks and Mortar is the story of a city’s sex trade in the former GDR, from 1989 to the present day, charting the development of the industry from prohibition to legality in the 20 years following the reunification of Germany. It focuses on the rise and fall of one man from football hooligan to large-scale landlord and service-provider for prostitutes to, ultimately, a man persecuted by those he once trusted. And other voices: women who work in prostitution, their clients, small-time gangsters, an ex-jockey searching for his drug-addict daughter, a businessman from the West, a girl forced into child prostitution, a detective, a pirate radio presenter…

Mirror, Shoulder, Signal by Dorthe Nors (Denmark), (tr.Misha Hoekstra) – Sonja is an intelligent single woman in her 40s whose life lacks focus. The situation must change – but where to start? By learning to drive, perhaps. After all, how hard can it be? Very, as it turns out. Six months in, Sonja is still baffled by the basics and her instructor is eccentric. Sonja is also struggling with an acute case of vertigo, a sister who won’t talk to her, and a masseuse who is determined to solve her spiritual problems. Frenetic city life is a constant reminder that every man (and woman) is an island: she misses her rural childhood where ceilings were high and the sky was endless. Shifting gears is not proving easy.

Judas by Amos Oz (Israel), (tr. Nicholas de Lange) – Set in the still-divided Jerusalem of 1959-60, Judas is a tragi-comic coming-of-age tale and a radical rethinking of the concept of treason. Shmuel, a young, idealistic student, is drawn to a strange house and its mysterious occupants within. As he starts to uncover the house’s tangled history, he reaches an understanding that harks back not only to the beginning of the Jewish-Arab conflict, but also to the beginning of Jerusalem itself – to Christianity, to Judaism, to Judas.

Fever Dream by Samanta Schweblin (Argentina), (tr.Megan McDowell) – A young woman named Amanda lies dying in a rural hospital clinic. A boy named David sits beside her. She’s not his mother. He’s not her child. The two seem anxious and, at David’s ever more insistent prompting, Amanda recounts a series of events from the apparently recent past. As David pushes her to recall whatever trauma has landed her in her terminal state, he unwittingly opens a chest of horrors, and suddenly the terrifying nature of their reality is brought into shocking focus.

I haven’t read any of these titles, I’m naturally drawn towards the French translations, since they give me an idea of what people here are reading and enjoying, Black Moses sounds like an entertaining read.
Eileen Battersby has written an excellent article discussing the nominations, giving her opinion on them and a few notable omissions, I’ll be rereading her views before deciding what I might read and checking out the Shadow Panel reviews, a group of bloggers who will be reading the list and making their own conclusions on a short list and winner, from the 13 chosen here.
Further Reading:
Man Booker International 2017 longlist includes Amos Oz and banned writer, Eileen Battersby, Irish Times
The Man Booker International Prize and the 2017 Shadow Jury Panel, Dolce Bellezza
Amos Oz and Ismail Kadare named on Man Booker international prize longlist, Sian Cain, The Guardian

To buy any of the books listed Click Here