Late last week I was working in London and had a free Saturday to enjoy the delights of the city.

I was meeting a friend for brunch in Marylebone High Street, ironically it is London’s French quarter, many of the shops and cafés and boulangeries are very familiar; however we weren’t heading for a French café, we couldn’t help but be tempted by one of New Zealand’s greatest exports, chef Peter Gordon and his restaurant The Providores with its excellent downstairs Tapa Room, the all-day restaurant, café and wine bar.

Before heading out, a quick google search “literary events London” informed me that the London Literature Festival was on, I couldn’t believe it!

So after a terrific brunch, off I went to the South Bank Centre and the Royal Festival Hall, always a hive of activity at the weekend, and hive  an apt metaphor, as the festival was using the image of a bee and honeycomb in its publicity.

To my delight and surprise, the American essayist and writer of non-fiction Rebecca Solnit, was speaking in the late afternoon, so I avoided the pull of Foyles to buy a ticket and then decided to check out The Spectacular Translation Machine, a collaborative attempt to translate an entire book from French into English.

The book On Les Aura! was the private diary of a French solider written in 1914 , which the renowned illustrator Barroux discovered and published in France, adding his line drawings to bring the story to life. It has never been translated into English, so each illustration along with the short paragraph of text was hung on a line around a room in the Royal Festival Hall and members of the public invited to choose an image and attempt the translation.

I chose an illustration of the solider lying in bed and a steaming cup of coffee beside him. The paragraph underneath the illustration read:

Along with children, a couple of students, a woman who could speak 15 languages and anyone else wanting to give it a go, we sat at the table and worked on our translations in a wonderful community approach. Such fun!

From there, a quick scout of the bookshop Foyles where I picked up a copy of Chinua Achebe’s Things Fall Apart and a copy of The Artist’s Way. 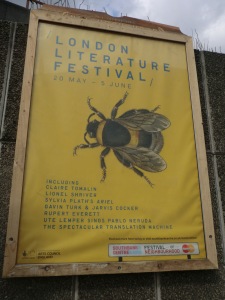 Then on to the Queen Elizabeth Hall for an inspiring talk by Rebecca Solnit, author of The Faraway Nearby, hosted by the literary critic Alex Clark. Solnit’s book was already on my list and downloaded to the kindle to read, but jumped to the top of the pile after an engaging talk about apricots, Alzheimer’s, Iceland and the significance of stories in our lives. A very poised and engaging speaker with scores of anecdotes and quotes that she repeats without hesitation.

It must be the season for book readings, because I am back in Aix and today we have had Jonathan Coe participating in an excellent and well hosted and translated discussion. More on that soon!