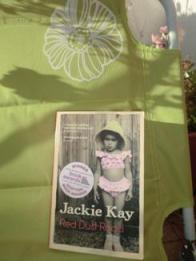 I discovered Red Dust Road after reading a feature about Jackie Kay in the Guardian’s A Life in Writing series coinciding with the release of her short story collection Reality Reality. Upon reading the interview I learned that she had also recently published a memoir focusing on the story of her adoption by a Scottish couple and her subsequent attempt to find her Scottish birth mother and Nigerian birth father. I ordered both books, keen to discover this writer’s work, particularly as she is also a renowned poet and I am drawn to writers who already have poetry resonating within their voice, and I couldn’t wait to jump into the memoir, more for personal reasons, since I have been on a similar journey myself.

While her brother Maxie said he couldn’t remember not knowing he was adopted, for Jackie, the realisation was one she remembered clearly after watching a cowboy and Indian film and feeling sad because the Indians had lost again and she wanted them to win. After observing that the Indians had her colouring which was not the same as her mother, she asked why. The revelation that followed came as a shock, she cried and worried that ‘not real’ meant her mother was somehow going to disappear or dissolve. But she had been gifted with a loving and sensitive mother, an honest, straightforward and intelligent woman, who clearly loved both her children unconditionally as Jackie Kay displays in her warm, appreciative depiction of the characters involved in this remarkable and exhilarating story.

My Friend’s Wedding in Lagos

‘Betrothed’, she told me ‘your father met your mother in the Highlands of Scotland and they fell in love. He was from Nigeria – look, here it is in the atlas – and she was from the Highlands – look, here’s where she was from, Nairn. They were madly in love and they made you, but he was betrothed and had to return to Nigeria to marry a woman he maybe had never met. They do that there, you know. Hard, Jackie, must have been hard’.

In no rush to piece together the puzzle, but knowing that she will, Jackie finds occasion with her work to be in certain places where she can do a little investigative work, she visits Nairn, where he birth mother grew up and Milton Keynes where she lives now; Aberdeen where her father was at university and Nigeria, that supposed foreign land of her ancestors that she had no connection to in her daily life, but has dreamed of and imagined and experiences a kind of coming home when she visits the ancestral village of her father.

Recounting her visit to the village and in particular meeting one of the family members, left pools of liquids in my newly prescribed reading glasses, tears of joy and recognition as acknowledgement is realised. I don’t want to say too much, because there is too much good in reading this for the first time and not knowing what will occur, but this is a wonderful story, narrated without sentimentality, putting the reader right in her shoes, almost experiencing it first-hand.

Hanging Out in Lagos, Nigeria

Like so many adoption stories and as depicted so well in Mike Leigh’s ‘Secrets and Lies’, there remains much mystery and secrecy around so many of the stories. For those who have buried that episode in their lives somewhere deep, there is a reluctance to risk the turbulence they perceive it may cause, and even when acknowledged by the parent adoptees are often kept from the rest of the family. This can be one of the greatest risks of pursuing genetic ties, the risk of rejection as an adult with full consciousness, unlike that of a baby; although much research suggests that a baby does indeed have awareness of the separation.

Many doctors and psychologists now understand that bonding doesn’t begin at birth, but is a continuum of physiological, psychological, and spiritual events which begin in utero and continue throughout the postnatal bonding period. When this natural evolution is interrupted by a postnatal separation from the biological mother, the resultant experience of abandonment and loss is indelibly imprinted upon the unconscious minds of these children, causing that which I call the “primal wound”. Nancy Verrier, The Primal Wound, Understanding the Adopted Child

The balcony from where the children sang to me

I laughed when she talked about the experience of being called Oyibo (white person) in the village, causing quite a sensation with her paler skin. She mentions returning to Lagos which she describes as more cosmopolitan and where one is unlikely to hear that word.

I have to say that I too know that word, from my visit to Lagos in 1999, when I visited for marriage of a very dear friend. In the quarter where I was staying, I was a bit of an anomaly and not only did the children come to stand outside the house in case they caught a glimpse of the Oyibo, they even had a song they sung, which my friend laughed at, remembering she too used to sing it as a child, something about ‘white man, eat more pepper (the very hot pepper soup for breakfast), make your face go redder’, I guess it’s true, we do have an unusual capacity to change the colour of our face when eating something very hot or becoming embarrassed!

There are so many extracts I could paste and talk about from Red Dust Road, the reaction of her own son, the discovery of names, the reading through old archives, visiting buildings from another past, the importance of the imagination and the importance of a true friend, but I would prefer that you read the book and enjoy your own journey and reactions to this wonderfully humane and important story that we are privileged to share.

Below, I share a few photos from my visit to Lagos, Nigeria in 1999, an unforgettable experience it was indeed.

Preparing for the Native Ceremony, bride wearing her family ensemble

View from a rear window 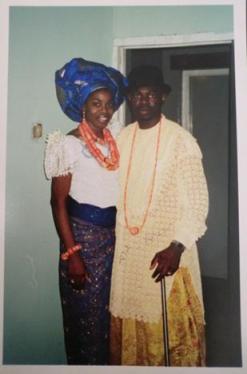 Bride with her brother, wearing an outfit from the husband’s family 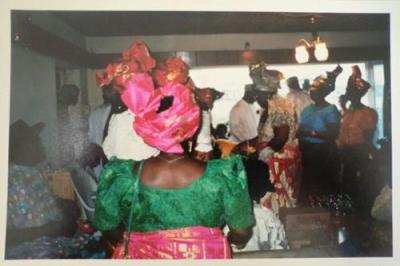