A novel in three acts that centre around the middle sister whose behaviour goes relatively unnoticed by those around her until she decides to become vegetarian, because “I had a dream“.

I’m already under the spell of Han Kang, having read Human Acts earlier this year, an extraordinary and unique book and I find The Vegetarian equally compelling, perhaps even more disturbing, a visceral, disturbing depiction of the fragility of the mind and the strange mechanisms, illusions we attach to in order to cope. It won the Man Booker International Prize 2016 and I’m reading it as part of #WITMonth, reading women in translation. 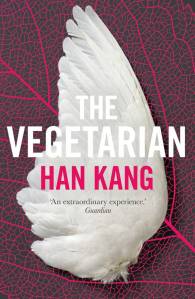 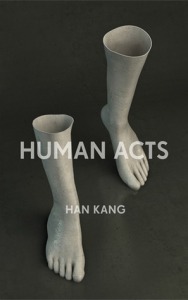 The Vegetarian reminded me of the distressing yet refined style and experience of reading Yoko Ogawa’s novel of interlinked stories Revenge and the shock and compulsion of Ken Kesey’s One Flew Over the Cuckoo’s Nest but really it is in a league of its own, a remarkable literary expression of the effect of people, our external environment and of our internal methods of coping, questions Han Kang poses through the situations she puts these characters into and our observations of what then happens.

The book is structured into three parts:

I. The Vegetarian – right from the beginning Kang draws up the husband and wife (Yeong-hye) characters with such precision, skill and intrigue, I was completely hooked from those initial pages. Their uneventful life changes suddenly with her decision to become vegetarian, bringing out the worst in everyone.

Before my wife turned vegetarian, I’d always thought of her as completely unremarkable in every way. To be frank, the first time I met her I wasn’t even attracted to her…However, if there wasn’t any special attraction, nor did any particular drawbacks present themselves, and therefore there was no reason for the two of us not to get married.

II. Mongolian Mark – this is a reference to a kind of birthmark that disappears post adolescence, it becomes the cause of an infatuation by Yeong-hye’s narcissistic brother-in-law, the obsessive video artist who is inspired to create what he perceives will be his greatest work, if he can convince his sister-in-law to become the subject of his oeuvre, and balance the fine line between art and pornography.

‘Will the dreams stop now?’ she muttered, her voice barely audible.

III. Flaming Trees Yeong-hye is in a psychiatric hospital, her sister her only visitor, the visits and the realisations she is having take their toll on her as she begins to understand her sisters descent from being human into believing that she is like or wishes to become a tree, that all she needs is sunlight and moisture, slowly depriving her human form of sustenance.

This pain and insomnia which, unbeknownst to others, now has In-hye in its grip – might Yeong-hye have passed through this same phase herself, a long time ago and more quickly than most people? Might Yeong-hye’s current condition be the natural progression from what her sister has recently been experiencing? Perhaps, at some point, Yeong-hye had simply let fall the slender thread which had kept her connected with everyday life.

It’s a sad tale of a woman’s descent into madness and how it affects those around her and has the reader wondering if this was brought about by the effect of attitudes and behaviour towards this one woman or whether this was something that was in her all along, something that is in everyone and under certain terrible circumstances can degenerate a sensitive human being into such a state.

Not one to let the reader off so easily Han Kang explores all avenues and leaves the reader continuing to ponder the same questions that perhaps inspired her to create this extraordinary, award-winning novel.