Tracy Farr’s delightful, fascinating debut novel is the fictional memoir of Dame Lena Gaunt: musician, octogenarian, puffer of exotic substances. It was one of my Top 5 Fiction Reads of 2015.

Lena went from a background of playing traditional instruments to becoming a modern musician, being the first theremin player of the twentieth century, an intriguing instrument played through movement but without the musicians hands actually touching the instrument. 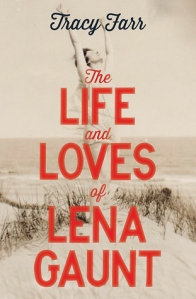 From its opening pages where we experience Lena’s daily routine, her strong pull to the sea, The memory of music in her bones, it becomes a book that grows on you until it becomes unputdownable.

“I move my arms in wide arcs in front of me, pushing water out to the sides and back again. I can feel the stretch in my shoulders, the tendons tense and twist. Bubbles form up my arms and, trapped in the tiny pale hairs, tickling like the bead in champagne. Moving my fingers in the water effects tiny changes in the waves that effect bigger movements. Action at a distance; just like playing the theremin.”

Lena Gaunt was an only child, born in Singapore, spending a solitary childhood in the tropics before being sent “back Home” her parents called it, alone to Australia where her Uncle deposited her at a private boarding school, at four-years of age. She became closer to her bachelor Uncle Valentine than her parents, who were distant, not just physically, but emotionally and who died before any change in their relationship might manifest.

Lena played the piano, but her first true love was the cello, one of her few regrets, that in taking up the theremin, the instrument she would become most well-known for, she stopped playing the cello.

After an unsuccessful visit to her father in Malacca (Malaysia) at 18, one where he had hoped to groom her into the demure, music playing, after dinner entertainment for his friends, a night walk into the seedier parts of the town, where she stumbles across her Uncle and her father’s business partner in an opium den, has her sent back to Australia, willingly and to the beginning of a life she will create anew.

“It had taken little for me to disappoint my father, but in truth, he too had disappointed me. Father, home, family; empty words, without meaning for me.”

She is introduced to and practices cello with Madame Vita Petrova, the eccentric, vodka and coffee drinking Russian with a unique ear and skill for the cello, not found in the more conservative establishments. It is her first encounter with the artistic and musical misfits, a bohemian community with whom she is more comfortable and will become part of.

It is through Madame Petrova she hears of the Professor, the man who introduces her to the instrument, the Music’s Most Modern Instrument, she will play for the world, the theremin.

“played by the waving of hands, like conducting an orchestra. It is played without the player touching it, not with a bow, nor by blowing. It is neither wind nor string, brass nor percussion.”

In Sydney, she meets Beatrix Carmichael, a painter/artist twice her age who becomes her constant companion, a part of who she is, one who really sees her. As Beatrix paints the two sides of the Sydney Harbour Bridge coming together on her canvases, from the verandah of their home, it feels so real, and yet there is a sense of the end of an era, as the subject becomes less intriguing on completion.

“We celebrated it, this joining of the city, the coming together, and yet Trix mourned it too. Since her return from Europe, since her arrival in Sydney, she’d been painting the growing bridge in parts, separate; in fragmented shapes formed of light and colour and sun and music.”

The novel follows Lena’s long, engaging life, and each turn of events that takes her away from the familiar until finally she returns to the place that most feels like home, where she plays one last performance and will meet the young filmmaker Mo, who provokes her into completing the life story she began to record many years before.

As the filmmaker questions Lena Gaunt about her life before the performance she had just given (in her eighties), the narrative flashes back to her past, her isolated childhood, boarding school, separation from family, visits by Uncle Valentine, the piano, the cello, musical influences, her life with Beatrix, making her remember it all, even the painful memories she had hoped never to re-encounter.

It is a fascinating story, a mix of fact and fiction, one that Tracy Farr succeeds in bringing alive through the places Lena visits and lives in, the people we encounter, the music that is made, the images that are painted and the heartbreaking losses she must sustain.