Drilling in a Nevada Silver Mine

Set in 1875, Savage Girl begins when the wealthy socialite Delegate family are on a tour of the American West, having travelled to Nevada by private train to visit family mining concerns.

The son, Hugo, a 22-year-old anatomy student at Harvard, who keeps taking time out from his studies due to undiagnosed mental health issues, visits a back alley sideshow attraction with his mother entitled ‘Savage Girl’, allegedly a wild, mute 18-year-old girl raised by wolves. It is a popular attraction, attracting many of the mining community and the Delegate family are interested in her, for much more than entertainment purposes.

They have something of an obsession with the feral child phenomena and the nature versus nurture debate and enter into negotiations with the keeper of the girl in their hope of bringing her to into their family, to civilise her and prove a philosophical point.

The Coming Out Season

They succeed in bringing her back to New York, dressing her and teaching her all that is necessary to make her debut into high society. While the parents are pleased with her progress, their son Hugo isn’t so certain.

Torn between what might be a growing love for his savage sister and a wary suspicion of her, he isn’t sure whether to admire her achievements or to be afraid of her influence, as there is a trail of violent murder that follows in her wake. Only Hugo seems to be aware that these unexplained deaths all have one thing in common, they are men that had recently had contact with their protégé. 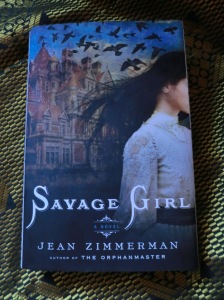 Hugo knows she has a night life that his parents aren’t aware of and begins to follow her to try to discover where she goes and what she does. He is equally  afraid, given his own history of instability and wonders if it may be himself who is responsible and though he cannot prove it, it is to hear his confession and description of what he found at the scene of the murder of one of his friends, that opens the first pages of the novel. It is Hugo who narrates this story of how the savage girl came into their lives and all the events that followed.

The novel follows ‘Savage Girl’s’ progress, Hugo’s paranoia and reasoning within the context of Manhattan’s Gilded Age (late 1800’s) where only those who know the rules, befriend the right people and come from socially acceptable families will make it.

It is an intriguing story, wrapped around a puzzling, violent mystery containing a dark, barely legible heartbeat of early feminist activism and that nature versus nurture debate. As historical fiction goes, it has all the elements, pure, entertaining escapism.