As I mentioned in this recent post, this year I’m reading a selection of contemporary Latin American fiction, thanks to a subscription with Charco Press. The first novella for the year is a collection of interconnected short stories, (reminding me of the Japanese author Yoko Ogawa’s excellent collection Revenge) Trout, Belly Up by Rodrigo Fuentes from Guatemala. 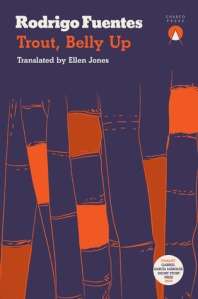 A man named Don Henrik is the connection between the stories, and though he is not the centre of any story until the end, through each tale narrated we come to know the hardships he has encountered as he struggled to run his various business ventures, we learn about the equally difficult life path his brother followed, and how that contributed to his father’s financial difficulties. Though it is not focused on in particular, we also know he is a foreigner, we imagine how his may have contributed to the challenges he and his family have encountered.

Don Henrik seems like a man who wants to live an ordinary life, he has the fortitude to create something out of nothing, he is kind, but he lives in a society where men give in to temptation, and are lead astray by a desire, by greed, by revenge, addiction and so always there are situations to be dealt with. He is an entrepreneur, but still learning the ways of men and nature in his adopted country.

Trout are delicate creatures and can’t handle temperatures over thirteen degrees. That’s why Don Henrik  bought his land right at the top of the mountain, because he wanted icy, cold spring water. But despite being delicate,  they’re completely savage.  They eat meat, even their own.Little cannibals, my Ermina called them.

Photo by The Lazy Artist Gallery on Pexels.com

Set in the Guatemalan countryside and forest, it is a place that appears to offer rest and tranquility and yet is beset with an undercurrent of hostility and violence, infiltrated by merciless entrepreneurs, hitmen, father’s desperate to go straight, endangering their daughters and their dog, and the plain stupid, caught in a gullible web of thinking they can make easy money, only to meet premature death.

What begins as one of the most endearing stories, becomes the one that almost prevents me finishing the book, involving the relationship between a young calf and a dog, it’s when men come between them that things turn despicable, I couldn’t help but see the young cow as a metaphor for women, who are the usual targets for such brutality.

Some will relate to its Hemingway-esque style, for me it was a straight forward, easy read, though I began to feel like I was reading a book likely to be enjoyed more by men readers, as it launched quickly into a tale of infidelity, of a man with a loyal wife and daughters distracted by a young shop girl, willing to sacrifice everything for a few moments of pleasure; men arriving with guns intent on teaching a lesson to other men, taking out their violent intent on an innocent animal, the bond between two men, their lives and friendship endangered by their descent into drugs and recklessly pursuing an activity (involving a boat and diving) while under the influence.

Personally, I find I have less and less tolerance for stories that depict women in this way, even if it represents a reality, it becomes tiresome. As a reader, I find I’m looking for a paradigm shift in the way female characters are depicted, something I am sure is coming, as I know I’m not the only one who feels this way.

Don Henrik isn’t the cause of any of this, is it bad karma, neglect or naivety, he is often absent, trusting his partners and workers to get on with the job, it is here that cracks form, that others seize their malevolent opportunity. He is a good man, he donated a kidney to his wife, he is tired, he’s found another good woman and just wants peace, but he’s a land owner, there are those who covet what he has, his desire for tranquility in this world he inhabits, observed by so much dysfunction, is an impossible ask.

In an interview Fuentes is asked about his writing of this book while living outside of Guatemala and revealed his observation and interest, having moved abroad in how people spoke and expressed themselves. He viewed an accent as something like a regions ideology, that we assumed ours to be neutral, but that it revealed much about how the speaker saw the world.

I look at Guatemala, and it’s a tiny country, but one with very talented narrators. And each region of the country tells stories in different ways. The way people tell stories in the mountains is very different from how people in the eastern part of the country tell them, or those living by the coast, or in the city, undoubtedly; I paid attention to that. I was always interested in the conversations taking place between the city and rural areas. Living abroad allowed me to pay attention to these conversations from a different vantage point, and a character like Henrik enabled me to move back and forth between those two worlds.

In his excellent, expansive review, Tom Blake provides a political perspective of Guatemalan and Latin American literature, suggesting that much of it has centred around themes of ‘displacement, disappearance, deracination’ suggesting that Fuentes offered a different view, the view of those who remain. He acknowledged that Fuentes held up a mirror to a masculine world, though went a little far in my opinion in suggesting that ‘the women hold immense, almost supernatural power’.

In doing so, he provides insights into why displacement might occur, why humans feel the need to move in their thousands to countries whose promises were exposed long ago as over-optimistic or fraudulent. But that is not his primary concern. These are stories about various types of hardship and conflict, where hardship is unending and conflict is self-perpetuating. His protagonists stick around to meet their difficulties head-on; they create tiny worlds around themselves where bizarre details become normal, where flirtatious cows walk on their hind legs and, frenzied fish turn to cannibalism. Thomas Blake

Trout, Belly Up was shortlisted for the 2018 Premio Hispanoamericano de Cuento Gabriel García Márquez, the most prestigious prize awarded to short-story writers in Latin America. It has been published in Guatemala, Bolivia, Chile and Colombia, as well as in France. Rodrigo currently lectures at the College of the Holy Cross in the United States, and lives between Providence and Guatemala. This is his first book to appear in English.

Ellen Jones is a researcher and translator based in London. She has a PhD from Queen Mary University of London and writes about multilingualism and translation in contemporary Latin American literature. Her reviews have appeared in publications including the Times Literary Supplement and The Los Angeles Review of Books, and her translations in publications including the Guardian and Latin American Literature Today. She has been Criticism Editor at Asymptote since 2014.

Jumping Between the Urban and the Rural: An Interview with Rodrigo Fuentes by José García Escobar

Review of Trout Belly Up by Thomas Blake