Last year my favourite read Kintu, by Ugandan author Jennifer Nansubuga Nakumbi was published by OneWorld Publications. This year, I enjoyed another of their award winning titles The Baghdad Clock by Shahad Al-Rawi (Iraq) (tr. Luke Leafgren) and now I am adding to that list, this wonderful historical fiction epic, Zuleikha by Guzel Yakhina (Russia) translated by Lisa Hayden.

April 2019 is the 100th anniversary of the beginning of the Gulags in Russia. Gulag is an acronym for Glavnoe Upravlenie Lagerei, or Main Camp Administration, they were a system of forced labour camp, a kind of re-education in a prison-like environment.

The Gulag was first established in 1919, and by 1921 the Gulag system had 84 camps. But it wasn’t until Stalin’s rule that the prison population reached significant numbers. From 1929 until Stalin’s death, the Gulag went through a period of rapid expansion.

At its height, the Gulag network included hundreds of labor camps that held anywhere from 2,000 to 10,000 people each. Conditions at the Gulag were brutal: Prisoners could be required to work up to 14 hours a day, often in extreme weather. Many died of starvation, disease or exhaustion— others were simply executed. The atrocities of the Gulag system have had a long-lasting impact that still permeates Russian society today.

The first people to be interned in these camps were known as kulaks (literal translation – fist, as in tight-fisted) meaning affluent peasants – originally the term referred to independent farmers in the Russian Empire who emerged from the peasantry and became wealthy, but the definition broadened in 1918 to include any peasant who resisted handing over their grain to authorities and under Joseph Stalin’s leadership it came to refer to peasants with a couple of cows or five or six acres more than their neighbors and eventually any intellectual who offended him.

Portrayed as class enemies of the USSR, the process of re-education was dekulakization the campaign of political repressions, including arrests, deportations, and executions of millions of prosperous peasants and their families. It is these people, decreed kulaks in the 1930’s, that are the subject of this novel.

As soon as I read premise of this novel, I wanted to get it, one of my favourite books The Industry of Souls by Martin Booth was set in a Russian gulag, though these are very different books. And there is nothing quite like being swept away by those wonderful character-lead novels such as Dostoevsky’s The Idiot and Tolstoy’s, Anna Karenina and the provocative poetry of Pushkin’s Eugene Onegin that have entertained us and demonstrated important aspects of creating characters in literature, and who could forget one of the highest grossing films of all time, Doctor Zhivago.

While we may not quite reach the heights of the masters, we are offered a refreshing and unique perspective in this compelling novel about a Tartar Muslim woman named Zuleikha, whose independent farmer husband has been accused of not having collectivised his property, resulting in her being sent away to be dekulakized.

They encounter the Red Army and their leader Comrade Ignatov as they return from hiding provisions, a meeting that will forever be etched in the minds of both Zuleikha and Ignatov, the latter becoming an equally important protagonist in the novel, which charts the journey and evolution of both characters.

They travel the same paths in opposite roles, one of the ironies of the novel to see how imprisonment in many ways improves the life of Zuleika, and control of the camp significantly diminishes the life of her captor.  Effectively she is rescued from a tyrannical husband and mother-in-law, having been married off at the age of fifteen (he 30 years her senior) where she was little more than a slave in their household, having also given birth and lost all her babies in that period.

Unlike some gulag stories, the people in this novel who are sent to be dekulakized are not sent to an existing facility. They spend months on a long train journey, where many will die, some escape, getting to know each other and then just as winter sets in they’re put on a barge, travel up a river and are dumped there. In order to survive, they must build shelter and find food, so their fate also extends to the leader who oversees them, Ignatov.

Although Zuleikha arrives in an emaciated state, she soon attains strong motivation to remain healthy, she finds solace in her role in the kitchen and ultimately strength in her eventual role as a hunter, venturing into the forest every day to set traps and capture wildlife to keep them all from starving.

Whereas Ignatov, who has enjoyed relative freedom and even privilege in his previous role, riding across the country rounding up suspected kulaks, is unhappy with orders to take on the role of Commandant to accompany these people to an unknown destination. His transformation is more of a decline from his lofty position of power, he loses faith and no longer commands the same respect he had, even for himself.

On the cover of the book and mentioned throughout the text, are Zuleikha’s intense green eyes, other versions of the novel are entitled “Zuleikha Opens her Eyes“, this transformation of character through having her eyes opened is one of the themes of the novel, she sees beauty as well as suffering, she will experience true love and profound heartbreak. It’s about a woman who comes out from having been defined and used by men, into finding new strength and her own role. It is a form of emancipation, albeit it a preliminary one. 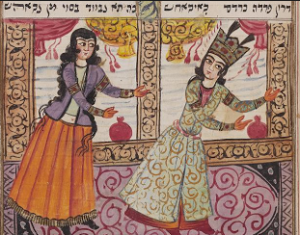 Yusef runs away from Zulaikha

One aspect of the novel I haven’t seen discussed anywhere is the significance of the names, Zuleikha and Yuzuf. I had a sense that those names somehow went together and I discovered an epic poem of the same name written in 1483 AD by the Sufi poet Jami.

It is an allegorical poem about the pursuit of love and of God, which also covers the allure and the suppression of love, the suffering of slavery and in aspects of this poem, I find aspects of three characters in the novel, Zuleikha, Ignatov and Yuzuf and I end my review with an ambiguous extract that may refer to a lover or a son, from the poem that reminds me of the closing pages of the novel.

The novel is unique in that it is written (and translated) by a woman who makes a young woman the centre of such an epic story, in part inspired by the actual memories of her own grandmother. She hasn’t set out to recreate the dire, conditions and cruelty of the camps, we witness a tale of survival, and through the eyes of a woman who already had a dire life, despite being the wife of an affluent peasant.

Guzel Yakhina’s grandmother was arrested in the 1930’s, taken by horseback to Kazan and then on a long railway journey (over 2,000 miles) to Siberia. She was exiled from the age of 7 until 17 years, returning to her native village in 1947. It was these formative childhood years that were in a large part responsible for her formidable character.

Upon her death at the age of 85 years, the author realised the importance of her early life and thus began her research and determination to understand how her grandmother operated, bringing her back in part through the inspired creation of the extraordinary character Zuleikha.

“I realised it would be impossible to remember the things she said as her stories were not recorded,” Yakhina says. “There was a feeling of guilt.”

A thought-provoking, interesting story and reflection, not at all brutal or hard to read, the author writes with compassion for her characters and brings out something very different from what we have come to expect from stories set in prison-like environments.

Zuleikha and Yusuf – extract from the epic poem

“The one sole wish of my heart,” she replied,
“Is still to be near thee, to sit by thy side;
To have thee by day in my happy sight,
And to lay my cheek on thy foot at night;
To lie in the shade of the cypress and sip
The sugar that lies on thy ruby lip;
To my wounded heart this soft balm to lay;
For naught beyond this can I wish or pray.
The streams of thy love will new life bestow
On the dry thirsty field where its sweet waters flow.”

My Reviews of Novels set in Russia

The Kindness of Enemies by Leila Aboulela

The Industry of Souls by Martin Booth

Article: The Calvert Journal: “Learn to live with it, even forgive.” – Guzel Yakhina on the traumas of Soviet history

Buy a Copy of Zuleikha via Book Depository

N.B. Thank you to OneWorld Publications for providing me with an advance reader’s copy of this novel.