I had a feeling John Boyne may have put his heart and soul into this book, though I had little idea how so. The blurb is intentionally vague, we know Cyril has been adopted and that the book is about his struggle with coming to terms with his identity.

The last novel of his that I read was The Boy in Striped Pyjamas, a moving story set during WW2, seen through the innocent eyes of Bruno, the eight-year-old son of the commandant at a German concentration camp. 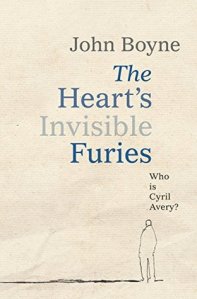 In The Heart’s Invisible Furies, a title taken from a quote by Hannah Arendt, the German-born American political theorist:

“A line came into my mind, something that Hannah Arendt once said about the poet Auden: that life had manifested the heart’s invisible furies on his face.”

we meet 16-year-old Catherine Goggin, sitting quietly in church in a small Irish village of Goleen in County Cork, as she is about to be denounced and humiliated in front of the entire congregation, then thrown out of, not only the church, but her home and the village, for bringing shame on the community.

The story is narrated through the voice of her not-yet born son, the boy that we come to know as Cyril Avery; he will be adopted and raised by Charles and Maude Avery, after Catherine travels to Dublin and takes up employment in the tea room of the Dáil Éireann (House of Representatives), where she is given a chance by the manageress, and eventually becoming that herself.

The book is divided into different parts, each covering a significant chunk of Cyril’s life, initially in Ireland, then a period in Amsterdam, time in New York and finally coming back to Ireland.

Cyril finds it extremely difficult within his family, his school and his culture to be himself. Through his inability to be and express himself, we see how oppressive a culture can be against anything or anyone who dares to step outside the acceptable norm,  highlighting the extreme hypocrisy that therefore must exist, as humans by their very nature are not clones of each other, they are born and exist in more than just binary variations. 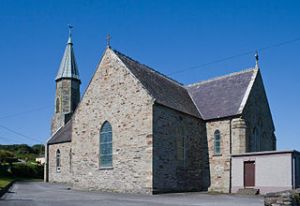 Church of Our Lady, Star of the Sea, Parish of Goleen, West Cork

In this first part, as Cyril is growing up, John Boyne makes something of a parody of his life, in particular in relation to his adoptive parents, who continually insist on reminding him that he is not a real Avery, and Cyril himself, so used to hearing this, will correct every person who uses the word mother or father, by inserting the word ‘adoptive’ to be sure they too understand.

“I always called them Charles and Maude, never ‘Father’ and ‘Mother’. This was on Charles’s insistence as I wasn’t a real Avery. It didn’t bother me particularly but I know it made other people uncomfortable and once, in school, when I referred to them thus, a priest punched me around the ears and told me off for being modern.”

The first time we read this, it seems sad, but the continual repetition makes it comic, and it is a tool that Boyne uses, perhaps to soften the effect of what must have been quite a soul-searching book to write, as he reaches deep into his own life experiences to create the life of Cyril.

At the age of seven, he meets Julian, the son of a lawyer who is helping his father stay out of prison for tax evasion, they will become best friends.

But for all that we had, for all the luxury to which we were accustomed, we were both denied love, and this deficiency would be scorched into our future lives like an ill-considered tattoo inscribed on the buttocks after a drunken night out, leading each of us inevitably towards isolation and disaster. 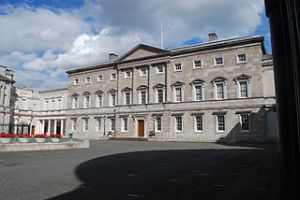 While the novel focuses on Cyril’s attempts to survive in a world hostile to his natural inclinations, his experiences highlight the struggle that so many people encounter, unable to live their lives openly and honestly without the fear of rejection and violence.

Boyne peels back the layers of Irish inclinations and attitudes in the 20th century and shows how destructive this closed mindedness is on the lives of anyone who crosses an imaginary line of acceptable ‘being’. The contrast with how Cyril is able to live his life in the Netherlands, shown through the carefree Bastiaan, who has known no such bigotry in his life experience is revealing.

It’s hard to say too much about the novel without giving away spoilers, except to say that this astonishing novel is a courageous, honest attempt to show how the way we conform to society and culture’s expectations, against our own nature’s can be so harmful to so many and it makes us wonder how life might be, if we lived in a more utopian world, where tolerance reigned supreme.

Boyne admits the comic form isn’t one he’s indulged in before and he has deliberately avoided writing anything personal in his novels until now.

“Perhaps Cyril Avery is everyone I might have been, that I am, that I amn’t, and that I might be yet. The desire to fall in love and to share one’s life with someone is neither a homosexual nor a heterosexual conceit. It’s human. We’re all suckers for a pretty face or a kind heart. What else can we do but keep hoping that the right person will show up?” John Boyne

22 thoughts on “The Heart’s Invisible Furies by John Boyne”