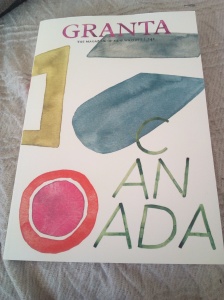 The first Granta journal of 2018, issue number 141 is focused on Canadian literature, whether it’s fiction, memoir, reportage, poetry or photography, each issue combines something of each of those categories, with new writing/work by known and little-known talent, around a common theme.

As guest editor and author of Do Not Say We Have Nothing, Madeleine Thien shares in the opening introduction, (and fellow guest-editor Catherine Leroux, writing in French), their only parameter for submissions was ‘What is being imagined here, now?’

Canada being a land with sixty unique Indigenous language dialects and more than two hundred languages reported as a mother tongue or home language, it was a wide-ranging brief.

Language becomes its own landscape in this issue of Granta. Language falls apart, twists, reformulates, shatters and revives itself. Animal and self, unfinished history, land and waterways, colonisation and dispossession, settlement and refuge – all these nouns are part of the truth of this place.

Apart from Leroux’s introduction, all the work is either in English or has been translated from English, however all work in translation is available to read on Granta.com in the original French.

I’m reviewing here the first story and may share other’s with you as I select randomly from the journal over the coming months.

The opening story is a mix of reportage and a retelling of the story of Mangilaluk Bernard Andreason, who when he was 11 years old, slipped out of the Inuvik residential boarding school he’d been sent to, along with two friends Jack and Dennis, to avoid being punished for stealing a pack of cigarettes, and spotting newly hung power lines, decided to follow them home to Tuktoyaktuk.

Nadim Roberts writes about Bernard’s journey in the present, interspersed with narrative reports on his own visit to Tuk in June 2017, forty-five years after Dennis, Jack and Bernard began walking that 140 kilometre stretch home. Robert’s by contrast, completes the journey from Inuvik to Tuk in thirty minutes by plane.

He tells of successive attempts by the government to build a road across the Arctic Circle, to facilitate oil and gas exploration and a stretch of highway that would connect Inuvik to Tuk.

From the plane I could see occasional glimpses of a new, near-finished road. This was the long awaited Inuvik-Tul all-season highway that would open in a few months. 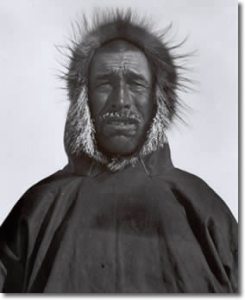 We learn that Tuk was a town founded by survivors from Kitigaaryuit, an Inuit settlement, that in 1902, after contact with whalers was cursed with a measles epidemic which drastically decimated their population. One young man, Mangilaluk, departed and went looking for a new place to live. His choice, a site on the edge of a harbour, would become what is now known as Tuk. He became chief and is still talked of today. Some believed he was a shaman who could shape shift into a polar bear.

In July 1961, two decades after he died, Mangilaluk’s granddaughter Alice Felix, was eight months pregnant. While home alone one evening, she heard a knock on the door. She wasn’t sure if she was awake or dreaming when the door swung open. A three-metre-tall polar bear stood in the doorway. It walked up to her, put its snowshoe-sized paw on her pregnant belly, and began to speak: ‘If it’s a boy, you name it after me.’

The story reminded me immediately of Doris Pilkington Garimara’s Rabbit Proof Fence, a tale of indigenous Aboriginal children removed from their parents (following an Australian government edict in 1931, black aboriginal children and children of mixed marriages were gathered up by whites and taken to settlements to be assimilated) and put in  a boarding school. The three girls in this true story followed a fence built to keep rabbits out of farming land, knowing that it passed close to their home.

Before 1955, fewer than 15 per cent of school-aged Inuit were enrolled in residential schools. Most children still lived on the land with their families, learning traditional skills and knowledge.

By 1964, more than 75 per cent of Inuit children attended residential schools. Their values, language and customs were supplanted overnight by a culture that saw itself as benevolent and superior, and saw the Inuit as primitive beings in need of sophistication.

Nadim Roberts interweaves Bernard’s story, his grandfather’s story and the current issues facing indigenous and local people in the region, in an evocative portrayal of one boy/man’s courage against the odds to make something better of his chance at survival.

It’s an excellent piece of writing and combination of narrative and reportage, bringing attention to this one man’s story and the plight of both his people and the environment in which they live.

You can read Nadim’s story for free at Granta, just click on the link below:

Nadim Roberts is a journalist from Vancouver whose work has been published in Walrus, Maisonneuve and the Globe and Mail.

Further examples of his work can be viewed on his website NadimRoberts.com

Have you read any recommended works by any of the authors mentioned or others featured in Granta 141?