Annie Proulx’s second novel The Shipping News (1993) won both the Pulitzer Prize for Fiction and the National Book Award for fiction. Her short story Brokeback Mountain from the collection Close Range was made into a powerful film, directed by Ang Lee. 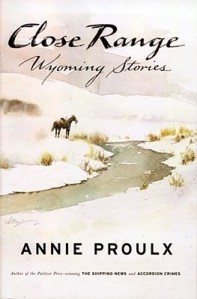 She is now 80 years old and has just published the novel Barkskins, a historical family saga that follows the descendants of two Frenchmen who arrive in the King’s newly claimed territory of New France (an area that today is made up of parts of Canada, the US and two islands that remain under French control).

Proulx hasn’t published a novel since 2002 and has spent the last ten years researching, studying, writing about and travelling to visit trees and forests of the world. Her novel has at its heart, the theme of deforestation and uses the two families to illustrate her thinking, that there is no greater protector or more harmonious dweller of a lands natural resources than those who are native to the area.

One of the characters Rene Sel, marries a native Indian woman, the other Charles Duquet, marries the daughter of a Dutch shipping magnate and from then on their destinies and the generations that follow, will navigate different paths, one family struggling to survive and to retain their identity and ways, the other creating a family empire, intent on finding a renewable resource to ensure the business continues to grow and expand.

Again Duquet saw the great weakness of the trade – surplus or scarcity. Beaver might disappear from over trapping or disease or for no discernible reason. Or the Indians took too many. He now regarded tales of immense profits in the fur trade as fables. He wanted great and permanent wealth, wealth for a hundred years. He wanted a fortune to pass on to his sons. He wanted his name on buildings. He was surprised to discover in himself a wish for children, a wish to establish a family name. The name Duquet would change from a curse to an honor.

Rene and his children learn from his Mi’kmaq wife, their mother Mari, who was a repository of answers to their many questions, for her people had ‘examined the world with boundless imagination for many generations’ already.

Over the months and years he learned from her. His relationship to Mari became a marriage of intelligences as well as bodies. They stood opposed on the nature of the forest. To Mari it was a living entity, as vital as the waterways, filled with the gifts of medicine, food, shelter, tool material, which everyone discovered and remembered. One lived with it in harmony and gratitude. She believed the interminable chopping of every tree for the foolish purpose of “clearing the land” was bad.

Parts of the novel are riveting and in particular, Proulx inhabits in an engaging manner, the characters of Charles Duquet and one of his descendants Lavinia Duke, who becomes the head of the family empire and is as ruthless as the men who became before her. It is she who Proulx sends to New Zealand in search of the enchanted kauri forests.

Yes. They have trees. Especially do they have certain ‘kauri’ trees, which experts describe as the most perfect trees on the earth, truly enormous trees that rise high with all the branches clustered conveniently at the top. The wood of these trees is without blemish, light, odourless, of a delightful golden colour, easy to carve and work, strong and long-wearing.

However, at just over 700 pages and spanning 300 years and multiple generations, it is a challenge to keep the characters in mind and as a result some make more of an impression than others, which both quickens and inevitably often slows the pace of reading, a necessary compromise perhaps when illustrating such a significant era of history through the narrative form of fiction.

It is a book of a writer’s indulgence, this is Proulx doing what pleases her; a trained historian spending her time indulging a subject that fascinates and rouses her interest which is also a major concern to her. Her book is a wake-up call, even if its lessons sadly, have been learned much too late.

“Nobody can visit the big trees again; the huge forests do not exist. The understorey has gone, and the smaller plants and animals – the ecosystem has been damaged. Change is right with us, and you can get frightened.” Annie Proulx – The Observer, 5 June 2016

I reviewed this book for Bookbrowse and also wrote an article Beyond the Book on the territory of New France, where it is currently Editor’s Pick and available to read by clicking on the link below:

To buy a copy of the book via Book Depository, click on the link below:

22 thoughts on “Barkskins by Annie Proulx”