I have been reading the work of Maryse Condé, one of the ten nominees and I chose Marlene Van Niekerk’s Agaat after reading Rough Ghosts excellent and enticing review, linked below.

Agaat is the name of the /maidservant, taken into Milla’s home at 4-years-old, in a state of neglect, her arm disabled, rescued from an abusive, dysfunctional existence that might fill the vacuum inside a barren woman allowing her to create a useful /companion, trained in all aspects of family and farming life.

Milla is the only child of a farming family and set to inherit and work her own farm, she is poised to marry Jak as the book opens. The novel explores the growing tension in their relationship through Milla’s diaries and the effect of Milla bringing Agaat into their (at the time) childless marriage. Twelve years into that bereft marriage she gives birth to a son. 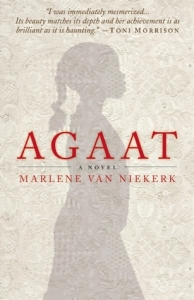 The chapters alternate between life as it was on the farm and the present, when Agaat, now a mature woman is caring for dying 67-year-old Milla, as her body shuts down, paralysed, infirm, communicating only through her eyes with this character she “tamed” whom she is now dependent on for everything.

Agaat is set on a the farm Milla inherited from her mother in South Africa, from the early years of apartheid until its dying days, just as Nelson Mandela and the African National Congress come into power. Milla takes over the farm when she marries Jak, the couple seem well-suited on the surface, though cracks and resentments appear early in the marriage, deepening to suggest otherwise.

Agaat is witness to, victim of and in many ways, moulded by this relationship, the family and the farm itself. She will learn everything from Milla, all that is required to run the home, the farm ; she will  help raise the son and establish a unique bond with him, passing to him her own knowledge, a consciousness more rooted in the land and its culture than any colonising people are ever capable of embracing. Rarely rebellious, it is in small but important ways that Agaat subverts the intentions of her masters, she who will ultimately inherit all.

The novel is narrated from Milla’s shifting point of view, the present tense, first person (I) view, a stream of consciousness narrative, in the latter weeks of her life when she lies bedridden, almost paralysed, in advanced stage motor neurone disease; the past tense, second person (you) view as she remembers episodes from the past, no doubt prompted by Agaat’s reading to her from the bundle of diaries she has kept over the years, both the original entries and annotations written in at a later time. The novel is bookended by a prologue and epilogue that give voice to the estranged son, something of a mystery and strangely absent from much of the narrative.

Agaat has become Milla’s specialist nurse and caregiver, tending to her needs with a detached, precision-like efficiency, communicating through the eyes, blinking an intuitive, telepathic like conversation, the result of a lifelong, if at times acerbic intimacy, command and control. The roles are now reversed, the landscape has changed and we are uncertain whether these actions are driven by love, hate, a sense of duty, a learned, stalwart independence, revenge or the imagined interpretations of a dying, guilt-ridden patroness.

We never enter into Agaat’s perspective, we view her through her mistress’s interpretation and the more we come to know about their relationship, the less sure we are of Agaat’s motives and feelings, unsettled by all that has come before, as we become aware that Milla’s present day view has to a certain extent rewritten the past into a more easily digested form.

There is something that Milla wants from Agaat and it is this minor battle of wills that provides a dramatic thread throughout Milla’s dying days. Agaat avoids fulfilling the request, bringing her mistress everything but the things she wants, a set of maps of the farm, like her body, the thing she is losing control of and the maps represent her last effort at retaining some form of control.

For a long time after finishing Agaat, I was not able to adequately express what I thought of it, I found it very disturbing. It is a story that stays with the reader a long time and reviewing it required a lengthy incubation period.

I read reviews in the New York Times and Rumpus (see links below) where critics referred to it as an allegory, convinced that these characters represented an abstract idea, that of apartheid, that it was there to teach or explain some kind of moral lesson. Sarah Pett, in her academic article refers to it as an ‘unruly text’, something that upends and disturbs the reader and here I find more resonance, along with these words proffered by the author herself, suggesting that these characters and this story should invite questions:

“…novels are texts of structured ambiguity that enable many readings. My reading of the text is no more valid than yours at this or any other point.  What I am mainly interested in as an author is to complicate matters…in such a densely patterned way that the text will not stop eliciting questions and that it will refuse to provide any definite answers to questions such as the ones you (and I) might ask.” Marlene Van Niekerk

In my reading of the story, the focus isn’t as much an indictment of apartheid, as a portrayal of that aspect of humanity, in which people attempt to enslave, train and/or control the other for a selfish purpose, as with slavery, as we know of the past and now of the present, often disguised as something else, it can be what an employer asks of an employee, a parent of a child, a human trafficker of its victims, a husband of a wife and it can occur in the reverse, the victim becomes the oppressor.

What is portrayed between Milla and Agaat seems to me something other than South Africa’s political policy of the 1940-1980’s, for that would be to limit it, it is born of it for sure, it shows what we are all capable of, depending on what we are born into, what we are influenced by and how we respond to those things. It is about how we think things through, with whom we share, discuss and listen, igniting and strengthening those neural parts of the brain whose inflammation will solidify that thinking, strengthening the belief and justification in our resultant behaviours.

I disliked being witness to it, to the playing along with the way things were for Milla on the farm, fulfilling her familial and societal expectations, flaunting them by taking in Agaat and exploiting her, with ignorant, self-righteous justification. However I couldn’t help wondering if Agaat was equally capable of the same. Disturbing and difficult to write about.

The allegory, if it is so, lacks any moral message, true the victim may eventually inherit the earth, however she too seems as likely to become the oppressor, for it is not the colour of one’s skin that dictates moral or good, all are capable of the same, we are weights on the end of the pendulum and depending on which way it is currently swinging, and where we are positioned, we could all too easily become either victim or oppressor.

Do read Rough Ghosts’ review, his will convince you to read it.

Rough Ghosts: And Her Name Was Good

Sarah Pett, University of York: The via dolorosa in the Southern hemisphere: Reading illness and dying in Marlene van Nieker’s Agaat (2006)