Purge by Sofi Oksanen is set in a rural village in the region of Läänemaa, west Estonia. The book is translated from Finnish by Lola Rogers.

It is a novel of two histories, one in the late 1930’s and 1940’s when Aliide and her sister Ingel were adolescents, spanning the changes in their lives after Estonia was annexed by the Soviet Union and renamed Estonian Soviet Socialist Republic (ESSR) and the other in the early 1990’s when a Russian-Estonian girl Zara, turns up unannounced seeking refuge.

At the time of the political occupation in 1944, those who failed to do their ‘political duty’ of voting Estonia into the USSR were condemned to death and mass deportations occurred (half perished, the rest unable to return until the 1960’s).

The novel of five parts opens with a letter written by Hans Pekk, son of Eerik, an Estonian peasant entitled Free Estonia! Each of the five parts begins with one of his letters, which date from June 1949 until September 1951 and then the chapters alternate between 1992 (post-independence), when the dishevelled young woman Zara arrives at Aliide’s home and the past, revealing Aliide’s youth and the years she lived through the Soviet occupation, from 1944 until 1951.

Zara’s story flips back occasionally to 1991 in Vladivostok, Russian Federation and to Berlin the same year, before her arrival at Aliide’s home. Zara is escaping brutal captors, men involved in sex slavery, human trafficking, for whom violence is an acceptable form of discipline and retribution and sex a currency of payment.

Aliide too has her secrets, having harboured a yearning for one man for many years, an obsessive, unrequited love that lead her to make decisions and live a life of repression and lies, to trust no one and operate continuously behind a mask to protect herself and the one she loved.

As the novel progresses and switches between era’s, the stories of the two women are revealed, we move closer to learning what happened to Aliide’s sister Ingel and the letter writer, Hans Pekk.

It is a compelling read whose slow revelations fasten the pace of reading, countered by the need to pay attention to the dates, as Oksanen flips back and forth in time.
Against a volatile and dangerous political backdrop, the idealism, obsessive love and risk taking characteristic of youth is played out and repeated across the generations, leaving one to wonder if anything ever really changes with time. In particular, the burden, degradation and abuse of women during war and conflict and the strategies pursued by them for survival.

‘Aliide went toward the road and tried to find the man that the voice had come from, and she found him. He was marching like a leader toward the dairy, and three or four men were following him, and Aliide saw how the tails of his coat thrust out like they were going to take off into the wind and how the others turned toward him when they spoke, but he didn’t turn to them when he answered, , he just looked straight ahead, his brow raised, looking toward the future. And then Aliide knew he was the man to rescue her, to safeguard her life.’ 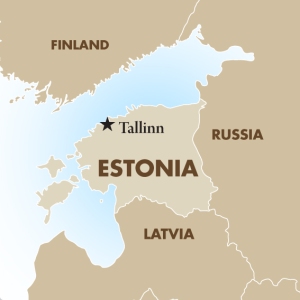 Wanting to visualise where the region of Läänemaa in Estonia was, I found it was connected to a somewhat ironic slogan, “Your safe nesting place,” a reference to the areas wetlands and meadows, providing a protective habitat to its wildlife.

It is a thought-provoking metaphor in relation to the novel, where civilians required a safe place to be protected from a different kind of predator. Is that nature? To require protection from the human predator? Is there safe refuge for those persecuted by the more brutal aspects of human power seeking? If we found ourselves living in such circumstances, how would we react?

Sofi Oksanen speaking about the title:

“When I was a child,” says Oksanen, “no one talked about deportations. People ‘went to Siberia’. Certain things were so dangerous to mention that people used a lot of expressions to circumvent the actual issues.”

Purge was a bestseller in Finland, winning numerous literary prizes and has been translated into 38 languages. The Finnish-Estonian author Sofi Oksanen, was born in Finland and spent her summers in Estonia, visiting her grandmother on a kolkhoz, a Soviet collective farm, giving her an insight into a life not many outside it had access to. The story appeared as a play before the author wrote the novel.