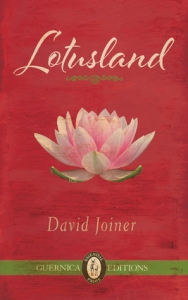 Lotusland starts out with the main protagonist Nathan, taking a long train journey from Saigon in the south of Vietnam where he lives, to Hanoi, the capital where he will visit his friend Anthony who he hasn’t been in touch with for some time.

Ironically, he reflects on the many things in his life that he perceives have always been a long wait for him. Ironic, because he is a character who has difficulty keeping a commitment, distracted too easily by the allure of the new and unknown, like the girl with the pink hair he meets on the train, or the attraction and undivided attention he gives to a new feature article he is asked to write, neglecting other commitments.

What follows is a well written story exploring the relationships between these two expatriate American men living in Vietnam, both their relationships to each other and the local women they marry/befriend and their contrasting attitudes to work. 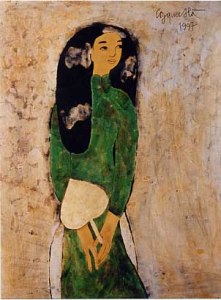 Girl With a Fan by Công Quốc Hà
Source: Wikipedia

Nathan, a struggling writer, considers entering Anthony’s real estate business to make money, promising he is serious this time, though his word is rapidly thwarted by his developing relationship with the pink-haired woman, a traditional Vietnamese lacquer artist and gallery owner Le, in the weeks before he is supposed to leave Saigon and move to Hanoi.

“Somehow the mystery of the painting excited him even more than Anthony’s job offer. As he prepared to return to Saigon with the task of wrapping up his life there, the offer paled in importance to the chance he had of getting to know her.”

Anthony, now a successful business owner, husband and father of two small children he can’t communicate with, is barely in control of his rapid success or family life, unsure whether to rely on his friend, though it is clear he needs him for more than just work reasons.

The couples are like the escaped and the escapee, almost doomed from the beginning as they represent that often classic situation of the allure of a foreign culture, where the aims of the individuals are the opposite to each other despite their attraction.

Le has an interview at the American consulate for a visa and has made it clear to Nathan that that is the basis of her interest in him, a fact he seems intent on ignoring, preferring to pursue the illusion of a more intimate relationship.

“How’d it go?” He touched her hand, her arm, her cheek. “You’re still alive, and your body’s intact – all good signs.”

“It went okay,” she said, giving him a quick hug. “It’s hard to tell with Americans. They’re serious but also friendly. I don’t know what’s real. The worst part was dealing with the Vietnamese staff. They look down on people like me.”

It’s an often painful, uncomfortable read as David Joiner makes no excuses for his characters’ flaws and we witness that selfish aspect of humanity in which every person appears to want something from the other yet rarely puts the needs of the other before their own before acting or speaking.

Like a falling trail of dominoes, each person wants something from the next, though rarely is the desire reciprocated, individuals search for that thing just beyond their reach without appreciating what they have at hand. Blindness, illusion, disillusion, the impulse to escape.

It reminded me of a quote from Jamaica Kincaid’s expansive essay A Small Place, on her returning to the island of Antigua where she grew up, after many years of being away.

“That the native does not like the tourist is not hard to explain. For every native of every place is a potential tourist, and every tourist is a native of somewhere. Every native everywhere lives a life of overwhelming and crushing banality and boredom and desperation and depression, and every deed, good and bad, is an attempt to forget this. Every native would like to find a way out, every native would like a rest, every native would like a tour. But some natives – most natives in the world—cannot go anywhere. They are too poor. They are too poor to go anywhere. They are too poor to escape the reality of their lives; and they are too poor to live properly in the place they live, which is the very place you, the tourist, want to go – so when the natives see you, the tourist, they envy you, they envy your ability to leave your own banality and boredom, they envy your ability to turn their own banality and boredom into a source of pleasure for yourself.”

David Joiner excels in evoking the sense of being in Hanoi, a city I visited 20 years ago and adored (see my photos above). I was quickly transported back there through his ability to develop a vivid sense of place and found those passages where the action is accompanied by this strong sense of the surroundings captivating.

“In Hanoi the French presence could still be felt, preserved in the architecture and layout, whereas in Saigon the atmosphere still harked back 30 or 40 years to the American era, the notion of aesthetics crowded out by the practicalities of war.”

I was shocked to find myself at the final page, an abrupt ending that leaves the reader with much to think about and likely to provoke discussion about the mix of post-war opportunity, life in foreign cultures, immigration, freedom and entrapment, capitalism and whether and or how it is possible to overcome the clash of cultures within a relationship. 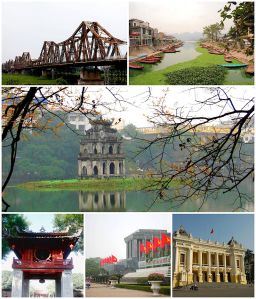 3 thoughts on “Lotusland by David Joiner”