The last of my collection of Turkish literature either brought back from Istanbul or lying on the shelf unread, Portrait of a Turkish Family was hailed as a masterpiece and I have to agree, a timeless classic, capturing a changing way of life as a consequence of war and fire, two of Turkey’s most fearsome destroyers of many families life of peace and tranquility that preceded them.

Irfan Orga was born in 1908 in Istanbul, his mother only 15 years old, his father 20 and a younger brother Mehmet born two years later. His sharing of the family story really starts at age 5 when he remembers certain events with an amazing clarity, although many memories and conversations are clarified in greater depth later on to him by his mother. His curiosity and gift for eavesdropping apparent early on and perhaps those memories are so clear because life was soon to change dramatically.

By 1913, war was imminent and it was clear that Irfan’s father and only uncle were going to be called up. He sold the family business which hadn’t been doing too well, against his mother’s wishes, before being sent to war, in the hope that there might be something to come back to, a fresh start. 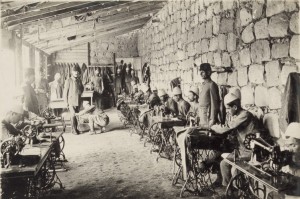 Once the men left for war, the family, raised and assisted by servants, continued largely in ignorance of what was to come, until food became scarce and their roles began to change.  As time went on, war forced everyone to adapt without realising that life would never again be as it had been before.

As change burrowed permanently into their lives, each would suffer in their own way, the coping mechanism of one often causing suffering in another.  Mother, mother-in-law, and the two boys were forced to move houses, downsizing significantly and rebelling against this change Irfan’s mother ripped the kafes from the windows of the house, insisting on letting the light in.

Kafes are the closely latticed harem shutters always used in Ottoman times to prevent passing males from catching glimpses of the women who moved within the house, not so much in evidence today, due to the neglect that makes them a significant fire risk. As back then, even today many families struggle to afford the upkeep required to take care of these houses, thus they crack, peel, rot and deteriorate into an unlivable state, when not consumed by fire first. We were fortunate to see this excellent restored house near Topkapi Palace and its equally neglected counterpart on Heybeliada Island below. 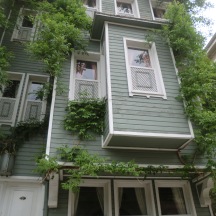 Without giving anything away, because it is so much better to experience the book, Orga captures the events and dramatic turning points of his family life with insight and brutal honesty. It is heart breaking at times, in particular the relationship between the mother and her sons, of which there is more focus than with his younger sister, born later and not always sharing the same experiences as the two boys.

Orga left Istanbul in his 30’s after a period in the Air Force to come to England and eventually married his Norman-Irish wife, amid controversy, not least of which it being deemed an illegal act in Turkey at the time, thus apart from one return visit, he was forced to remain living in exile in England.

His son Ateş Orga contributes a heartfelt afterword, sharing something of his father’s life outside the scope of his book, which focuses on those first 30 years of his life in Turkey.

A brilliant read, full of insight into life in a liberal Muslim family at the beginning of the 20th century and their challenges in coping with the effects of war and devastation.

It seems timely to be reading this as contemporary events overshadow historical reflections, provoked by the seizure of one of the last remaining urban parks in central Istanbul, it is being reclaimed to build a shopping mall and the citizens begin to revolt against what they perceive as authoritarian rule.

Ironically, on our last day in the city 2 weeks ago, we tried to find Taksim Square and Gezi Park, but all we found was a corrugated iron fence and a sea of humanity traversing the great shopping street between Taksim and Tunnel. It had been said that you haven’t seen Istanbul if you have not visited this area, but I was at a loss as to what I was supposed to find, all trace of restive beauty hidden and on the verge of replacement.

I am reminded of Pamuk’s Istanbul Memories of a City and the many pages of hüzün, that sense of melancholy that has hung over the city since Ottoman times and can’t help but wonder if the time for silent brooding is erupting into a new age of outspoken demonstration. 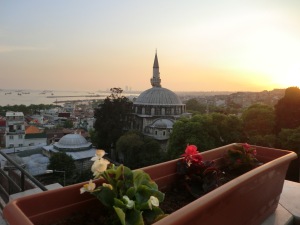 And all down the Bosphor, down, down to the Black Sea, ran the tall trees and the old wood houses that suit the skyline so well. If I turned my head to the left there on the hilltop, I could see Dolmabahçe Saray white and artificial as a wedding cake in its peaceful setting. Miniature mosques front the water’s edge and there at the end of all the shining palaces lay Istanbul – my Istanbul that will forever hold something of my heart. Grey it would look from this hill and the smoke from the boats would lie over it like a soft veil and tall and tapering are the minarets that enchant the skyline, and from my hill I would see, being the Mosques, the Marmara like a faint line of thread. Irfan Orga

16 thoughts on “Portrait of a Turkish Family by Irfan Orga”