Although I carried the book  to Istanbul and back, there was no inclination to read it while I was there, I started it on the return plane journey, the appropriate occasion to do so, for Pamuk’s Istanbul is laced with more melancholy than the city I visited and I realise with hindsight, the importance of constructing my own unfettered impressions, free of this philosophical consequence of the decline of a grand empire and the inclination of its progeny to feel somewhat bereft at missing out on an era when their prominence was that much greater than it is today.

However, I remain as intrigued about the author now as I did before I started the book, it is a unique form of memoir, more of a nostalgia trip through selective memories of his childhood and his city, sharing anecdotes from both that formed him into the writer he is today.

The imagination features large in Pamuk’s  life from a very young age, when he was five-years-old he was sent to stay with an Aunt on his own and she used to point at a picture of a child and say it was him. He came to know him as the other Orhan and while he knew it was not him, this shadow of himself never left him behind. Neither did he ever leave the city of Istanbul in the fifty years up to writing this book.

“But the ghost of the other Orhan in another house somewhere in Istanbul never left me. Throughout my childhood and well into adolescence, he haunted my thoughts.”

Though he never left the city, he read many works by writers and poets who published impressions of Istanbul, Gustave Flaubert, the poet Gérard de Nerval, Théophile Gautier, Pierre Loti, Edmondo de Amici and laments that in the same period they were writing about the city,  little was written or painted by its own artists and writers, therefore, whilst the work of others is familiar, it remains an outsiders perspective and does not quite capture the essence of how the Istanbullus see themselves.

Pamuk often visualises the city in black and white and throughout the book on nearly every page are photographs depicting the city in monochrome. He spends an entire chapter describing Hüzün, the Turkish word for melancholy explaining how if differs from sadness and finishes by almost convincing the reader that it is something close to a virtue, absorbed with pride and shared by a community.

“the hüzün of Istanbul is not just the mood evoked by its music and its poetry, it is a way of looking at life that implicates us all, not only a spiritual state, but a state of mind that is ultimately as life affirming as it is negating.”

“… hüzün brings us comfort, softening the view like the condensation on a window when a tea kettle has been spouting steam on a winter’s day.”

Entrance to the Grand Bazaar

I did not come to Istanbul expecting to see sultans, dervishes or crystal chandeliers, though there are traces of them all if you seek them out. I came to see a city that comfortably exists while straddling two sides of a significant divide.

The Bosphorus, that deep channel of powerful surging water and current that separates two continents is deceiving. The reasonably short distance from one side to the other, only 2 to 3 kilometres, the fact that it embraces one city reminds us that there is less than we might think between the people who inhabit each continent.

A deep and powerful separation of continents, yet humanity passes across it with ease. Great divides can indeed be overcome.  The streets of shops and the Grand Bazaar attest to that passage of traders and pilgrims who have entered and passed through the city over hundreds of years.

It takes until the very last chapter before we meet the more mature Orhan who will become a writer, because unlike many born to write, his first love was painting and he shares much through his observation and study of artists who painted his city, something he practiced prolifically in his youth. The demise of this early calling occurred not long after his teenage muse was packed off by her family to Switzerland, his mother’s relentless cautions against pursuing the life of an artist transforming his rebellion against completing his architectural studies into announcing: 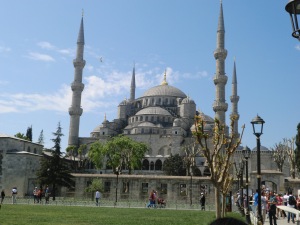 “I was, as I had begun to discover even then, the sort who could always wear the same clothes and eat the same things and go for a hundred years without getting bored so long as I could entertain wild dreams in the privacy of my imagination.”

A treat for admirers of Orhan Pamuk’s work and those who have had the good fortune to visit his wonderful city, which is not nearly as melancholic to the visitor as it is to a philosophical resident.

Next up, murder at an archaeological dig! Time to leave Istanbul and travel inland with Ahmet Umit.