I haven’t featured this award before, but I’m intrigued because it’s an award where nominations are made not by publishers, but by libraries from around the world, based on their perception of literary merit, so it brings a truly international flavour from a strong readership based group. It is interesting to see both the familiar and unfamiliar among them, a representation of what is being read around the world in English.

Novels From 30 Countries Across 10 Languages

Only four novels from Ireland are among the 49 books nominated by libraries around the world and the award is generously sponsored by Dublin City Council. Full details of the nominated titles, including the name of the library who nominated the book and the reason why they chose it, can be viewed here on the website.

Personally, I have read six of these, When All is Said by Anne Griffin (Ireland), The Confessions of Frannie Langton by Sara Collins (UK), Aue by Becky Manawatu (NZ), The Yield by Tara June Winch (Australia) and On Earth We’re Briefly Gorgeous by Ocean Vuong (US) and The Vanishing Half by Brit Bennett (US).

Now in its 26th year, this award is the world’s most valuable annual prize for a single work of fiction published in English, worth €100,000 to the winner. Titles are nominated on the basis of ‘high literary merit’ as determined by the nominating library. You can see where the participating libraries are located on this map. Three new nominating libraries were welcomed this year: Slemani Public Library in Iraq, South Dublin Libraries in Ireland, and District of Columbia Public Library in USA.

A Third Are Novels in Translation

Nominations include 18 novels in translation with works nominated by libraries from 30 countries across Africa, Europe, Asia, the US & Canada, South America and Australia & New Zealand. If the winning book has been translated, the author receives €75,000 and the translator receives €25,000.

The international panel of judges who will select the winner, features Jan Carson, a writer and community arts facilitator based in Belfast; David James Karashima, an author, translator, and associate professor of creative writing at Waseda University in Tokyo; Lebanese-born, Dr Rita Sakr who lectures in Postcolonial and Global Literatures at Maynooth University; Dr Martín Veiga, a Cork-based Galician poet, translator, and academic who lectures in Hispanic Studies at University College Cork, and Enda Wyley, an Irish poet, author, and teacher who has published six collections of poetry.

They will narrow these nominations down to a shortlist of 10 titles announced on 25 March and the winner will be announced in June 2021.

During Level 5 COVID-19 restrictions, readers can borrow some of the long listed titles as eBooks and eAudiobooks on the free Borrowbox app, available to all public library users.

Have you heard of or used Borrowbox?

The Irish are so keen to get people reading they even have an Ireland Reads Day on February 25 and they invite readers to make a pledge! 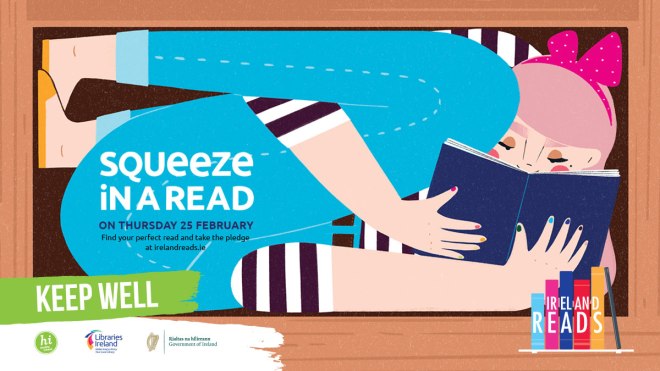