Today I saw the twitter hashtags #WorldBookDay and #WomensHistoryMonth prompting some interesting references to notable women, so I decided to look back at books I have read and reviewed here at Word by Word and show you a selection that highlight a few important women in our recent history, some you may not have heard of, all of whom have made significant contributions to our world. Click on the headings to read the reviews and share your recommendations.

The first woman who came to mind and whose book I want to recommend is Wangari Maathai’s Unbowed, One Woman’s Story. Kenyan and one of a group of young African’s selected to be part of the ‘Kennedy Airlift’ , she and others were given the opportunity to gain higher education in the US and to use their education to contribute to progress in their home countries. Maathai was a scientist, an academic and an activist, passionate about sustainable development; she started the The Greenbelt Movement, a tree planting initiative, which not only helped save the land, but empowered local women to take charge of creating nurseries in their villages, thereby taking care of their own and their family’s well-being.

“We worried about  their access to clean water,  and firewood,  how they would feed their children,  pay their school fees,  and afford clothing, and we wondered what we could do to ease their burdens. We had a choice: we could either sit in an ivory tower wondering how so many people could be so poor and not be working to change their situation, or we could  try to help them escape the vicious cycle they found themselves in. This was not a remote problem for us. The rural areas were where our mothers and sisters still lived. We owed it to them to do all we could.”

She won the Nobel Peace Prize in 2004, which motivated this story to be written thanks to others who pushed her to share it, thankfully, for she was an extraordinary and inspirational woman, who sadly passed away from ovarian cancer in 2011.

Henrietta Lacks is perhaps one of the most famous women we’d never heard of, a woman who never knew or benefited from her incredible contribution to science and humanity. A young mother in her 30’s, she was diagnosed with an aggressive form of cancer and despite being eligible for and receiving medical care at the John Hopkins hospital in Baltimore, a medical facility funded and founded to ensure equal access no matter their race, status, income or other discriminatory reason, she died soon after.

Before treatment, samples of her healthy and cancerous cells were taken, part of a research initiative in search of ‘immortal cells’ that could be continuously replicated. It had never been done before, until now – the newly named HeLa cells would become one of medicine’s significant advances.

Rebecca Skloot heard about the HeLa cells in biology class in 1988, became fascinated by them, she focused her research on finding out about the woman behind this important advance in medical science. This book tells her story and rightly attributes her a place in history. 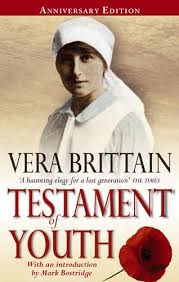 Vera Brittain was a university student at Oxford when World War 1 began to decimate the lives of youth, family and friends around her. It suspended her education and resulted in her volunteering as a VAD (Voluntary Aid Detachment) nurse. Initially based in a military hospital in London, events would propel her to volunteer for a foreign assignment, taking her to Malta and then close to the front line in France for the remaining years of the war.

Her memoir is created from fragments of her diaries, sharing the angst and idealism of youth, and later looking back from the wisdom of middle age, for she was 40 years old before her tome was published.

War changed her, she could no longer tolerate the classrooms of Oxford and the contempt of a new youth.

‘I could not throw off the War, nor the pride and the grief of it; rooted and immersed in memory, I had appeared self-absorbed, contemptuous and ‘stand-offish’ to my ruthless and critical juniors.’

She changed her focus from literature to history, in an effort to understand and participate in any action that might prevent humanity from making the same terrible mistakes that had caused the loss of so many lives. She became an international speaker for the League of Nations.

The book was made into a dramatic film of the same name in 2014.

Maya Angelou is best known for her incredible series of seven autobiographies, beginning with I Know Why the Caged Bird Sings (1969), narrating her life up to the age of 17. She became a writer after a number of varied occupations in her youth.

This book was her last memoir, not one in the series, but one that could only be written from afar, from the wisdom of 80 years, when she could look back at a torturous youth, at a neglectful mother and see her with love, compassion and forgiveness.

‘Love heals. Heals and liberates. I use the word love, not meaning sentimentality, but a condition so strong that it may be that which holds the stars in their heavenly positions and that which causes the blood to flow orderly in our veins.’

Diana Athill OBE (born 21 Dec 1917) is someone I think of as the ordinary made extraordinary. She was a fiction editor for most of her working life, forced into earning a living due to circumstance, for while her great-grandparents generation had made or married into money, her father’s generation lost it. She clearly remembers her father telling her ‘You will have to earn your living’ and that it was something almost unnatural at the time.

War removed her chance at marriage and she appeared to reject it after that, revelling in her freedom and independence, though others suggest she was scarred by the intensity and pain of her first relationship. While the first part of the book focuses on her life, the second half recalls some of the relationships she developed with writers over the years, Mordecai Richler, Brian Moore, Jean Rhys, Alfred Chester, V.S.Naipul and Molly Keane.

The more extraordinary era of her life was still to come, for in her 80’s she began to write memoir, and achieve notable success, her book Somewhere Towards The End won the Costa Prize for Biography in 2008. Now 100 years old, she hasn’t stopped writing yet.

The Guardian: Diana Athill: ‘Enjoy yourself as much as you can without doing any damage to other people’
The former editor on regrets, the advantages of old age and why she’s still writing at 100

Have you read any good books about notable women we might remember for #WomensHistoryMonth?

Buy a copy of one of these books via BookDepository