On March 4th I sent an email to Karin Crilly about a competition being run on The Good Life France. I saw this competition mentioned on twitter  @lifefrance and thought of Karin as I knew she was writing a memoir about her year in Aix-en-Provence and I thought it would be a good idea for her to send something out into the world.

The Good Life France is an independent online magazine that celebrates life in France and attracts a number of writers and contributors who write on a wide range of subjects, keeping visitors and residents informed about France and all things French. The competition was to celebrate the 2nd anniversary since their inception and they invited contributions of work up to 1000 words on France or French related.

Karin replied and said she would be very interested in entering the competition and asked if I would like to read the extract she had chosen, from the first chapter of her book.

Unbeknown to us both at the time, it was the beginning of the two of us working together. I read her work, made some suggestions and she polished her already excellent prose into a shape resembling 1000 words of an evocative experience in Paris that did indeed wow the judges, moving some of them to tears yet uplifting them at the same time.

Earlier this week, to our great joy, we learned that Karin had won the competition, ahead of more than 100 other entries and her story Scattered Dreams in Paris has now been published on The Good Life France.

You can read the story here by clicking on the title. 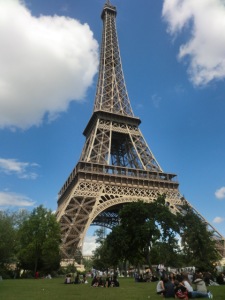 Update: Karin’s memoir has now been published, you can find out more by reading my review here: The Blue Satin NightGown by Karin Crilly.