Haruki Murakami’s work was introduced to me by my Uncle, he is a designer and as such, in my eyes at least, is often at the leading edge of new trends. He gave me Dance, Dance, Dance to read and off I went twirling and spinning into the world of this unique author who takes you in and out of reality with such ease, you soon fall into his writing’s magic – at least if you allow yourself to just go with it.

I was a little unsure after the first novel, it was so unlike anything I’d ever read, but I was curious to know how he continued and whether there was some common thread among his novels, so I went for his well-known classic The Wind-up Bird Chronicle next. 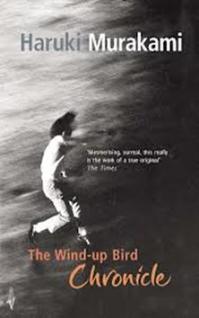 In this volume Toru Okado is looking for a job, and while living through this in-between stage, in between jobs – his wife doesn’t return home one day thus he enters into a strange period where each of his interactions take on questionable qualities as he tries to navigate his days and understand what is happening around him.

If it sounds somewhat surreal, it is – but then aren’t those periods in life when we are neither here or there, in between one thing and another?  He finds an empty well in a yard near his apartment and enters it, just to dwell. Revelations come to him from people, from being in the well and from situations he encounters, even reading about this world and its strangeness almost normalises it, we adapt to it as readers.

Revelations came to me also, weird dreams of deep wells and immersing in blue pools of water and seeing things clearly.

And so to 1Q84, my beach read this summer. 1Q84 is an alternative world (and there we have the reference to George Orwell’s 1984 another alternative world). Murakami by now I have discovered is a creator of these worlds that look and feel exactly as the world we know, they are inhabited by the same characters, their protagonists have the same life, but reality has been altered somewhat and they usually spend the story trying to discover what that is and why things have suddenly changed.

Having now read three of his works, I have found in each of them a kind of ascent or descent involved in entering this parallel universe; in Dance, Dance, Dance it was the lift/elevator, in The Wind-up Bird Chronicle it was a descent to the bottom of the well and now in 1Q84 Aomame climbs down an expressway stairwell to street level, which seems to have been the portal to 1Q84 (although Janáček’s sinfonietta playing in the taxi may have had something to do with it).

Aomame is a loner, growing up in a Jehovah’s Witness family she had no real friends and rejected her family’s way of life early on. The one true friend she did have later in life met a tragic end which changed Aomame’s life; she couldn’t save her friend but through her skills and work she ensured that many other women were saved from a similar fate.

In alternate chapters we meet Tengo, an aspiring writer who agrees to edit and improve a book that has been nominated for an award. Naively he agrees, though he also feels something is compelling him to become involved against his better judgement. The stories of Aomame and Tengo follow a similar trajectory, there are many parallels between the two, not just their previous lives, but in the way events seem to happen simultaneously.

By the conclusion of Book Two Aomame’s and Tengo’s worlds are coming together again (as they did when the two were 10 years old). Tengo realises he too is in 1Q84 and it all has some link to the book he has edited, a world of two moons, where The Little People exist and the purpose of their air chrysalis has not yet become clear.

After 623 pages, I must now read Book Three to learn what happens next and tie up the threads of the story which certainly feel as if they are working towards some kind of weird revelation.

For a surreal trip, one almost guaranteed to affect your dream-life, pick up a Murakami if you dare, he is strangely addictive.