Sadly the wonderful author Andrea Levy, well-known for her Orange Prize winning novel Small Island (2004), passed away on February 14, 2019. I remember reading it when I lived in London and the joy of a new literary prize that highlighted exactly the kind of stories and authors I liked to read. Her fifth novel The Long Song (2010) was shortlisted for the Man Booker Prize and won the Walter Scott Prize for historical fiction. It was turned into a 3 part television adaptation, screened in Dec 2018.
Andrea Levy’s debut novel Every Light in the House Burnin’ reads like an intimate portrayal of family life, so much so that it felt like reading about the author’s childhood, clearly she drew from it. Capturing the essence of family life from perceived childhood injustices that many will recognise, to the humorous anecdotes a clash of cultures brings, when children are raised in a different country to their parents, she immerses into family life and reimagines those poignant moments that shaped her. From the Guardian Obituary, her family description reads like an addendum to the novel.

Her father, Winston Levy, travelled to Britain on the Empire Windrush in 1948, and was joined six months later by his wife, Amy (nee Ridguard), who had been trained as a schoolteacher in Kingston, Jamaica. Both parents were of mixed race. Her father’s Jewish father emigrated to Jamaica after the first world war and converted to Christianity, and her mother was descended from William Ridsguard, a white plantation attorney who had a child with his black housekeeper. Both parents came to England expecting greater opportunities, but found that their qualifications were rejected. 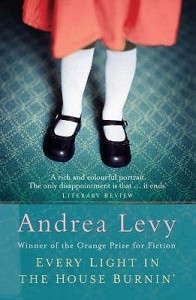 The novel is a portrait of a family in London, the children of Jamaican immigrants, narrated from the point of view of the youngest child Angela (referred to also as Anne), it brings to life moments in their family life that impacted them all, through carefully realised characters, to the beginning of the decline, just after her father’s retirement.

In one scene Anne is left with her father during their holiday at the beach, her mother and other siblings have gone out. Her father has spent most of the holiday lying on the couch, not at all tempted by the sandy beaches or the sea, but Anne is persistent. Reluctantly he agrees.

I smiled as I watched my Dad haul himself from the sofa. I waited for fifteen minutes before my Dad emerged from his bedroom. He was dressed in his grey suit. The only sign that he was about to take part in a leisure activity and not have a day at work was that he was not wearing a tie and had the top button of his shirt undone.

The challenges have only just begun. Anne wants to sit in the sun, an idea her father rejects, suggesting a secluded spot further back, where the ice cream hut has created the only shade on the beach. Initially he relents to sit in her spot, but refuses to join her in the water, too cold. After her swim, as she lies down to enjoy the warmth of the sun, a shadow looms over her.

The story turns towards their encounter with the father’s decline and the navigation of the NHS health service, a lack of knowledge, the pain and difficulties encountered as a result, resolved only when the daughter pushes and insists on their behalf. Alternate moments of perseverance and giving up, driven by a need, pushed back by intimidation and shame. Here, Anne offers to visit the Doctor to ask for stronger pain medication. 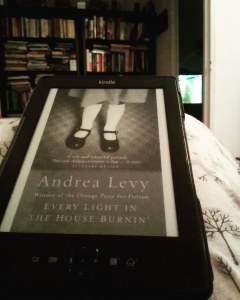 Aspects of the past come to light later on, were they secrets, those things family members never talked about, which end up buried and become secret-like. When an Aunt visits telling them how things are back home in Jamaica and asks about their newfound life in England, the land of opportunity, things not said are loud in their omission. If there was regret, it’s been long-buried, replaced by silence and resignation, not to be discussed.

There are many light and humorous moments, interspersed with the reality of the struggle the family has in fitting in, within a culture where there are expectations about how to do things and underlying racism or indifference toward outsiders. They do their best to integrate, to pass on their stoic values to their children, who only realise as they become adults how difficult it had been for them.

I knew this society better than my parents. My parents’ strategy was to keep as quiet as possible in the hope that no one would know they had sneaked into this country. They wanted to be no bother at all. But I had grown up in its English ways. I could confront it, rail against it, fight it, because it was mine – a birthright.

It was a beautiful beginning to her literary career, a fictional novel that paid tribute to her parent’s and siblings lives, that demonstrates the empathy Levy had for her characters and the pure gift of storytelling that would take her on to deserved critical acclaim. Highly Recommended. 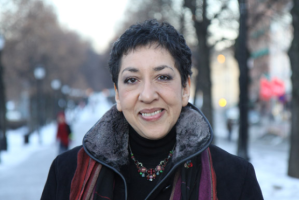 After a life of striving, Andrea Levy got the acclaim she deserved, Gary Younge, Guardian
Andrea Levy Gave a Voice to All My Silenced Forebears, Sharmaine Lovegrove, Guardian