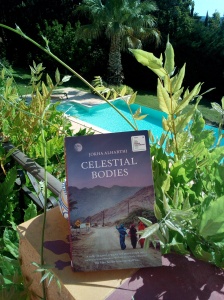 Jokha Alharthi is from Oman and her novel was originally written in Arabic. She is the first female Omani novelist to be translated into English and the first author from the Arabian Gulf to win the prize. The judges had this to say:

“It’s less flamboyant than some of the other books, there’s a kind of poetic cunning to it. It starts feeling like a domestic drama in a fascinating world, but with the layers of philosophy, psychology and poetry, you are drawn into the prose, through the relationship between the characters. It encouraged us to read in a slightly different way.”

It is a read that requires just letting go and going with the flow, allowing the characters to lead us wherever it is the author is taking us. I say that because it is a non-linear narrative, that moves its narrative perspective often from one character to another and also across time seemingly randomly, as events trigger memories and take the story back to their origin.

There is a family tree in the opening pages, which I did refer back to often, though perhaps it wasn’t really necessary, sometimes just knowing it is there is an excuse to refer to it, but it’s not really necessary for a story that follows no chronological order, that moves from the present to the past and back generations according to the feelings, thoughts and behaviours of its characters.

Abdullah’s thoughts occupy us more than most, and they often refer him back to a childhood memory, that turns into a recurring adult nightmare of being suspended by ropes in a well, a punishment for taking his father’s rifle to shoot magpies with the boys who lured him out to join them. Only they beat him.

He is married to Mayya, who he loves, since the first day he saw her – and because he was a man, he could have her as his wife. The feelings aren’t reciprocated and love doesn’t flourish there. Unbeknown to him there is another ‘celestial body’ orbiting in his universe that intends to reel him in.

For me, this felt like a novel that centred around the lives of those connected with ‘The Big House’ whether they were descendants of the one who built it, to contain his family, slaves, to be place friends could visit. For some it is a sort of prison, not necessarily the slaves, for they have certain freedoms not given to those who are part of the family, especially those who have no memory of being stolen.

Her husband remembers and shouts when she says such things.

The second child of his mother who had five boys in all, he remembers everything: the local gangs that attacked their village wanting money, or perhaps to pay old scores; the merchants, a jumble of Baluchs and Arabs, who bought them, there on the plains, the filthy crammed ships those merchants crammed them into; the eye disease that spread fast from one child to the next on shipboard; his mother’s screaming for her other children, who’d been shoved onto other boats; the nursing baby who died of smallpox while on her breast, so the slave traders snatched him away and threw him into the sea.

He spoke through clenched teeth. Listen to me. Merchant Sulayman raised me and, yes, he put through me through a little schooling, and he found me a wife, but it was all for his own self-interest, all because he meant me to serve him, and to have my wife as his servant too, and then my children later on.

Even those who leave, (to Cairo), when tragedy strikes, in their upset they return to this small town of The Big House, forever connected to those who reside there.

At certain points in their domestic history, there are things that are changing in the external and international world, like the abolition of slavery, though those affected by it here, seem immune to the changes, their lives don’t change, they are not even aware of their rights. Change here happens slowly, in the rebelliousness of each new generation, challenging what came before in some way.

Time changes them, multiple generations must live together in understanding and be misunderstood. Some things are never understood and leave some always seeking the truth, to the point of obsession.

Do you see the way people move life – and I mean, just the bits of their lives you can see? Most of their movement through life is invisible, it goes on inside of them, so for us it exists beneath the surface. Their own private worlds, their imaginations. When I liberated myself from living through my father’s head I created my own imagination with a paintbrush.
.
My art saved me from acting out the image my father had made for me.
.
When I could finally shake myself loose, when I managed to no longer live inside the image of me he had in his head, I finally found out what freedom tastes like….How liberated a person feels when it’s finally no longer a question of being just an extension or embodiment of someone else’s fancy, even if that someone is your father.

It doesn’t follow a conventional plot and just as in life, the voices of the household come through chapters almost haphazardly, just as thoughts do, and yet over the span of 240 pages we have a sense of this extended family and community of the pressure of time moving on, of lives changing and challenging old perceptions.

As I look back at the book, I see so many passages highlighted and randomly opening to any of them I immediately see what it was that attracted me and understand why this book elevated itself above the rest, to win the Man Booker International Prize in 2019. There is a richness to it, a complete immersion, a gathering of influences, duty alongside rebelliousness, tradition nestled with change, love and loss, history and modernity.