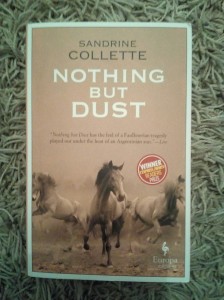 As soon as I saw the cover of Sandrine Collette’s Nothing But Dust I wanted to read this book. I didn’t know what genre it was, but it was published by Europa Editions; all the books they choose to publish that I have read have been excellent.

From the description, a family of four boys working a farm after their father’s departure, ruled by a tyrannical mother, lived out on an arid, lonely Patagonian steppe, mounting family tensions…

Reminiscent of Coetzee’s Disgrace, Chatwin’s In Patagonia, the Dust Bowl novels of Steinbeck, the writing of Cormac McCarthy, and the southern gothic of William Faulkner, Nothing But Dust is a gripping, unsentimental, ultimately majestic story about life in one the most inhospitable places on Earth.

Now I haven’t read Chatwin or Faulkner, and I don’t often agree with book comparisons, however reading this book did remind me of Cormac McCarthy’s excellent Border Trilogy, in particular his coming of age novel All the Pretty Horses, which I loved.

We know how tough and relentless life is, and is going to continue to be from the opening pages as the elder twin brothers carry out their favourite cruel tricks on the youngest brother Raphael; they’re fearful of the mother, but know she won’t intervene, her ideas on how to raise boys doesn’t include protecting or consoling them. Young Raphael becomes the son the reader will sympathise with and wish things for, throughout this thrilling novel.

Because he was the youngest, his brothers had gotten into the habit of chasing him around the house on horseback when their mother wasn’t watching. As soon as the twins had grown strong enough to grab him by the collar and lift him up at a gallop from astride their criollos, it became their favourite pastime.

It’s a novel of survival, not just the physical hard work, the long days but the need of the two younger brothers to always be on alert, Steban they call the half-wit, silenced by what he has seen, not trusting anyone, his allegiances drift knowing he is unable to stand up to any of them.

He realises that for as long as he can remember, he has always been flanked by anxiety. The apprehension of the next blow, the insults. And everything else.

We become immersed in this life on a sheep farm with The Mother, her four sons, a dog named Three and the Criollos they ride, on the arid, infertile steppe they live on in Patagonia. All they’ve known and grown up with is harsh and menacing, reliably so; all they know is work, for her.

There are evenings when she reminds herself that she came from a family of wretches with neither land nor fortune, and that everything seemed to point to a future of working herself to the bone in the service of others, and she grumbles and ruminates, finds a thousand things wrong with the steppe she’s been left with – well, that was the least she was owed, after all the misery she endured year after year. There is no room for gratitude in the mother’s life: what she has, she deserves.

When The Mother makes her first mistake, it opens a crack in her tight-fisted way of ruling the way they live, a slipway through which things might be different, we are lead out of the plateau towards the forest, towards the light with a deft, atmospheric thrill and underlying dread.

When Raphael must track down two missing horses, he is lead out of the steppe towards lands that are unfamiliar, encountering new terrain. While Sandrine Collette has demonstrated a talent for creating unforgettable characters, here she excels in depicting the landscape as it changes from the dry, dusty, harshness of the plateau to the lush, fertile, freedom of the forest.

The change of landscape leaves him stunned; all he has ever known is the treeless steppe. He looks up at the magnificent boughs, the changing hues of entire regions where the rain has ventured…

Goes and sits down.

If he was at the farm he would never do this, but solitude and freedom propel him.

As the mother exhibits weakness, loosening her indomitable control over the boys, the rage of the elder twin begins to rise. It is that Lord of the Flies moment, that human impulse towards savagery no longer contained by the mother’s warped rules supposed to keep it in check. The mother and the elder son embrace that savagery and as long as they are in unison, they rule. The younger sons represent civilisation, violence is not their instrument. They observe, learn, they seek a different way.

It’s a fantastic, compelling novel of the human condition, in an original setting and family dynamic. Thought provoking, atmospheric, charged with tension, it will stay with you long after reading.

N.B. Thank you to Europa Editions for providing me with a review copy.