Donal Ryan is the Irish author many of us remember for his debut The Spinning Heart, long listed for the Man Booker Prize in 2013 (won that year by Eleanor Catton’s, The Luminaries) and noted for perseverance in pursuing his dream to become a published author – his manuscript was rejected 47 times – before becoming a word of mouth sensation and setting him firmly on the track he knew he was destined for.

Since then he has published The Thing About December and A Slanting of the Sun: Stories and now this riveting novel, which was easily a five star read for me. I liked his debut, but this I loved and did not want to put down.

Similar in style to his earlier work, in which he zooms in on the minutiae of life and thoughts of a character(s) in the wake of a pivotal event, here he focuses on one character, Melody, a thirty-three-year woman, whose marriage has become like a habit she wants to kick, but rather than seek help to heal the cracks, she gives in to an impulse and finds herself pregnant to her 17-year-old private student, Martin Toppy, from a Traveller community.

Courageously, Ryan assumes the first person narrative voice of a pregnant woman, the first chapter labelled week twelve, finishing with Post-partum, though this is not a woman obsessed with what is going on inside her body, it’s a woman in the throes of needing to build a nest.  Alone with her thoughts, she thinks back over how she came to be where she is now, interrupted often by memories of her best friend Breedie.

“I’d look at Breedie’s long bare arms, and long legs, and I’d feel a fizzing mixture of admiration and love and terrible envy, that she could make my mother smile and wish she had a daughter like a swan.”

Into this isolation comes another Traveller, partially rejected by her family and community, whom Melody befriends and becomes attached to, picking up her teaching with Mary, where she left off with Martin. Here’s their encounter when they first meet:

You can come into town with me now, if you want.

I can’t. There’d be murder. I’m been watched every single second.

Why did your sisters leave you out?

I’m a shame to the family.

And she told me a story, and I listened, and I didn’t interrupt her once. Her name is Mary Crothery, and she’s nineteen years old.

The language, their way of speaking, the dialogue is raw, visceral and puts the reader right inside the story, it easily evokes a sense of place, you can sense the attitude of the characters around Melody as soon as they rap their knuckles on the door. Mostly they’re angry, except her father, he’s sad and in fear of disappointing him further, Melody stays away from where she’d be most welcome.

“Thinking now about the way I thought about things then, about how I let my mother’s anger towards him seep into me, I feel a desperate need to apologise, to mitigate the hurt I must have caused him as I drew away from him, as I let my perfect love for him be sullied, and eroded, and disintegrated, by the coldness of a woman I didn’t even really like, but whom I wanted more than anything to be like.”

The weeks pass leading to a crisis point as Melody’s life and that of the Traveller community intersects, highlighting family grudges, betrayals, their battles for redemption and overcoming guilt. 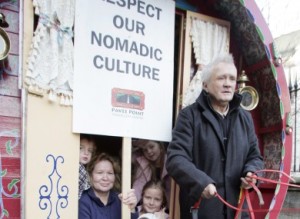 It is interesting that Donal Ryan chose to highlight characters from within the Irish Traveller community, as 2017 was a significant year in terms of identity for them. There are estimated to be between 29,000 – 40,000 Travellers in Ireland, representing 0.6% of the population. Recent DNA research has proven they are as genetically different from the settled Irish as they are from the Spanish and that this difference may have emerged up to 12 generations ago, as far back as 1657.

Irish Travellers, sometimes pejoratively referred to as tinkers or gypsies are a traditionally itinerant ethnic group who maintain a set of traditions, who after years of lobbying, finally gained recognition of their ethnic status from the government. It is seen as a momentous victory for the thousands of Traveller children who have long suffered from  exclusion and discrimination.

It’s an engaging story, beautifully rendered and while it doesn’t promise to address all the issues it raises, it does what for me the best novels do, puts the readers in the shoes of another in an attempt to see things from multiple perspectives.

Article in Irish Times, Travellers as ‘genetically different’ from settled Irish as Spanish

Buy a Copy of All We Shall Know via Book Depository