Peggy Hillcoat is 17 years old and has been back in her family for 2 months now, everything is familiar and strange at the same time. Her father is no longer there, but in his place is an 8-year-old brother Oskar, she hadn’t known of until her return. He is the same age now that she was when she and her father disappeared, for nine years, without trace.

Claire Fuller’s debut novel Our Endless Numbered Days is the story of Peggy, narrated looking back from the present, when she has returned, slowly revealing the events that occurred that summer when her mother travelled to her native Germany and her father decided to take her out of school early, so they could camp out in the back yard, applying his obsessively learned survivalist skills, as if in preparation for the great Armageddon.

“When my father invited members of the North London Retreaters to our house for meetings, I was allowed to open the front door and show the half-dozen hairy and earnest men into Ute’s sitting room. I liked it when our house was full of people and conversation, and until I was sent up to bed, I lingered, trying to follow their discussions of the statistical chances, causes and outcomes of a thing they called ‘bloody Armageddon’.”

Peggy’s mother Ute was a young concert pianist and at 25-years-old, while on a tour of England, met her father, a stand-in page-turner eight years her junior.

Throughout the story and as witnessed in the quote above, there is a level of perceived inferiority surrounding the father, he is at pains to fulfil his ambition, even if it is only to complete the fallout shelter in the basement, a job he completes on the same day Peggy returns from school to learn that her mother had gone on a concert tour of Germany without saying goodbye or telling her.

The chapters unfold and we witness Peggy happily camping out in their backyard, which backs onto the leafy Highgate cemetery, with her father, learning survivalist skills and it almost feels like a natural extension of their fun that they will put their learnings into practice by packing items written on the endless lists they’ve been creating to depart on a journey into a larger version of the backyard.  But we embark with hindsight, already knowing this is a forbidden trip, one that required them to take their passports, traverse a river and seek out that cabin in the woods Peggy’s father had been telling her about for a long time ‘die Hütte’.

It is because we are forewarned that nine years have passed, that we read of the camping trip with mild horror, wondering how they are going to survive and what might have occurred during this eternity of days that will follow. Especially when her father tells her that they are the only survivors, that the world really has ended. There is no going back.

“Each morning since we had arrived, my father had cut notches in die Hütte’s door frame, but when he got to sixteen he decided to stop.

‘Dates only make us aware of how numbered out days are, how much closer to death we are each one we cross off. From now on, Punzel, we’re going to live by the sun and the seasons.’ He picked me up and spun me around, laughing. ‘Our days will be endless.’” 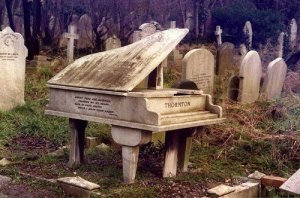 Ironically, though far from civilised society, Peggy learns the one thing her mother never passed on to her, how to play the piano. One of a number of obsessions that her father embarks upon, he fabricates a piano out of wood after Peggy who he has renamed Punzel expresses disappointment that the cabin doesn’t possess a piano as he had promised. He has brought the sheet music for ‘La Campanella’ with him, which she will learn by heart on an instrument incapable of making a sound.

‘Its going to take a lot of practice, Punzel. Are you sure about this?’

I knew it was a warning he thought he ought to give, rather than a challenge he wanted me to back down from. There was an enthusiasm bubbling inside him, like he hadn’t had since he started work on the fallout shelter. My father always needed  to have a project.

As the days pass, we become aware of the deterioration in stability of the father and the importance of every ritual to ensure their survival. Right from the beginning we read with a base layer of tension, as if waiting for something bad to happen, wondering what is going to tip the balance, who is going to survive and what the repercussions of these endless days will be.

Fuller keeps us on tenterhooks right until the end, even though Peggy has returned home on the very first page, right from that first page, when she cuts a picture of her father’s head out of a photo and hides it in her underclothing, we sense something not quite right. And by the end we too will be going out of our mind needing to know why.

Our Endless Numbered Days is an extraordinary debut and like Franz Liszt’s piece of classical music La Campanella, it draws us in, lulls us into its rhythm and carries us up as it builds to a crescendo, before crashing us down to experience its wild, unruly finale.

Other Books by Claire Fuller (my reviews)

Buy a Copy of Our Endless Numbered Days

34 thoughts on “Our Endless Numbered Days by Claire Fuller”