Christine wakes up in the morning and doesn’t recognise the man sleeping in the bed next to her. Nor do the photos posted in the bathroom assist her, they refuse to evoke any memories. Every day she wakes with the same feeling, she remembers nothing of the past 20 years and is surprised to find herself middle-aged and wonders who is in the bed beside her.

Her doctor suggests she begins to write things into a journal that she can read each morning, promising to call her in the morning to tell her where the journal is, so she can quickly bring herself up to date with what she has leaned the previous day.

He also suggests she keeps it to herself, that she not share it with her husband. Can she trust her doctor, can she trust her husband? The journal both helps and confuses her, until ultimately it reveals what she needs to know and the incredible facts that have been kept from her.

Before I Go To Sleep by S.J.Watson is an award-winning crime/thriller novel, a best seller when it came out – however it is not the kind of book I would usually choose to read, which probably best explains why it was an okay read for me and not one that I can say too much about.

It’s a suspense novel, however because a large portion of the novel is taken up with reading Christine’s journal, (about two-thirds of the novel) the suspense is delayed (in my opinion) until the last 50 pages and that middle section is more one of mild intrigue. It can get a little repetitive as each day she must go through the same thing, slowly learning more about what happened to her to cause her amnesia and what has happened in the last twenty years. A very long time.

The reader becomes increasingly suspicious despite Christine’s best intentions to convince us that everything is okay. S.J.Watson is good at withholding any clue to what will eventually be revealed, however some of these absences felt inauthentic, as if Christine wasn’t really interested in finding out more about the people around her and why there only appear to be two people in her life, her husband and her doctor. It might have been more intense if she’d been more curious and insistent to know the truth and challenged those she is in contact with about the inconsistencies.

One of the measures of a great book for me is to highlight passages throughout a book, sentences and paragraphs that make me want to reread, that create an image, that evoke something, they are the literary gems. This is not that kind of book, but I am happy that it was suggested by the book club, we had a very interesting discussion about it and the idea of losing one’s memory or another sense.

And for fans of the book, it looks like there is a film in the making, with Nicole Kidman as Christine:

And in another thread on twitter S.J.Watson admits that he has finished his long-awaited, next book. 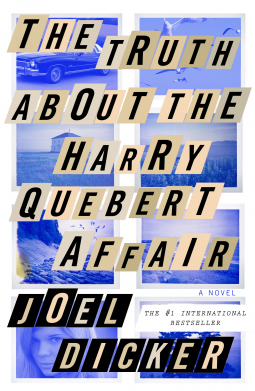 And even though I say it’s not my genre, I am about to read another, knowing that it too probably won’t offer much in terms of literary highlights, but this thriller is a French translation that is taking the world by storm.

It has already become a bestseller in France with over 2 million copies sold in Europe and was part of a heated auction for the English publication rights. It has to be read if one wants to contribute to the conversation after all.

So watch out for The Truth about the Harry Quebert Affair, the debut novel by 28-year-old Swiss author Joël Dicker, likely to be a popular read this summer.

Interview in The Observer : Joël Dicker: ‘I lost a bit of control of my life’