Fellow French resident Rosemary who blogs at Aussie in France, mentioned this book after reading my review of Hélène Gestern’s The People in the Photo, a novel written in letters, which is also an unravelling of a mystery, where a woman seeks to understand who her mother really was in those years before she was born.

In Gestern’s book, the mother died when the daughter was only 4 years old, it took her more than 30 years to begin searching.

Lucy Atkins protagonist Kal is 38 years old, the mother of an 18 month old boy Finn and living in England when her mother dies. It is both her death and the discovery of suspicious text messages on her husbands telephone that prompt her somewhat irrational, spur of the moment decision to dig into her mother’s past, the period around her birth, when she lived in North America.

Kal is grieving not just her mother’s death, but a loss she can’t explain, the reason her relationship with her mother was so fraught, what it was she reminded her of that seemed to cause such angst. On an impulse, she runs away from confronting her own relationship difficulties, an escape that carries her to the small island of Spring Tide, near Vancouver to find Susannah, a woman who sent her mother a postcard on the same day every year, a friend she had never ever mentioned. 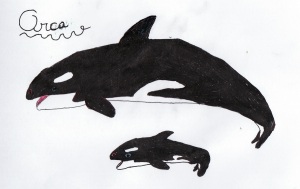 Lucy Atkins brings an air of tension and menace to the story, as those with knowledge of the questions Kal is asking actively avoid answering to prevent her from finding out. She creates a story with pace and suspense while a captivating back-story recounts to the reader little by little the events that occurred in her mother Elena’s life leading up to her birth.

The author evokes this sense of place well, although for a British woman arriving on a small Canadian island for the first time, she makes few observations relating to its foreignness, we forget that she is in a place where we would likely be noticing many of the differences of a foreign culture, although it might be said that Kali is completely blinded by her grief and outrage, because she makes plenty of decisions that will make the average reader gasp in disbelief. If anything, England felt more foreign and the wildness of Canada described with real familiarity.

The author uses a dual narrative technique to tell  a little of the back-story of Kal’s mother Elena’s life.  She met her British husband while doing a PhD at a university in California, and as the story will reveal, ended up in Canada.

The narrative around the mother and the sharing of her passion for sea creatures, their unique behaviours, relationships and ways of communicating – did you know that orca whales speak in different dialects? – was a fascinating distraction from the drama of our foolhardy heroine and the not so friendly friend she pursued for enlightenment.

Atkin’s uses various “mystery” devices to create intrigue, like failing to mention characters that would have been present in the narrative and mind of the character, and although this sometimes interrupted my reading occasionally, ultimately I just wanted to continue to know what was going to happen, especially as there was a young child involved!

It was an enjoyable read  even though I was a aware at times of the author pulling strings in the narrative to create effect and had to try to stop myself from expecting that Kal act more sensibly or true to her instinct, as anyone who has ever had an 18 month old baby would likely agree, her journey was indeed just what she needed to teach her some sense.

I took this book with me on a flight to London and it was the perfect in-flight read, no likelihood of dozing with The Missing One, you’ll want to stay awake until its finished.

Note: This book was an Advance Reader Copy (ARC) provided by the publisher via NetGalley and Artwork provided by my children, one who likes to draw, the other who likes to make digital art. Yes, it’s the school holidays!

9 thoughts on “The Missing One by Lucy Atkins”