I bought this back in November and put it aside to be my post-Christmas read, a time when I am happy to indulge in a little magic realism, which this promised to be and most certainly was.

Since finishing it, I have come to see it more and more as a metaphor of the reading experience itself, Le Cirque des Rêves is a circus like no other, it opens at night and closes at dawn, full of enchantment and extra-sensory pleasures, where everything exists in black and white and whose followers, les rêveurs (dreamers) wear a splash of red to identify themselves.

Now, sitting in this cave of lightly perfumed silk, what had seemed constant and unquestionable feels as delicate as the steam floating over her tea. As fragile as an illusion. 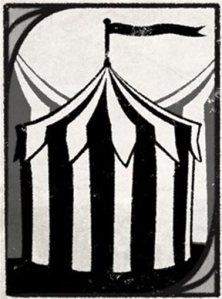 Each tent offers an extraordinary experience and like a good story, invites its readers inside to share the temporary illusion. It struck me the way the circus moves from city to city, from country to country with its fans following to be a little like the blogosphere itself, this place where we easily circumnavigate the globe, visiting blogs and reading/experiencing their content, like les rêveurs ourselves.

We lead strange lives, chasing our dreams around from place to place.

The Night Circus follows the lives of two young people, Celia and Marco. Marco is an orphan plucked from obscurity in 1874 by a somewhat slow aging illusionist to be trained as his protégé, a pawn in a seemingly never-ending game he continues to wage against Prospero the Enchanter, who chooses to nurture (in his own cruel way) a daughter he discovers he has when she arrives on his doorstep in 1873, with a suicide note pinned to her coat written by her mother. The two youngsters follow the different schools of thought of their masters, destined to meet and compete in a game where only one can be victorious and where the rules are deliberately obscure.

Along the way a catalogue of characters are drawn into this web of entanglement, along with the reader, never quite knowing exactly what drives and controls the outcomes, but mesmerised nonetheless within the fascination and charm of the circus and its characters. 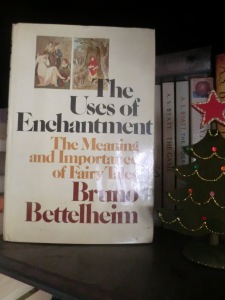 This book prompted me to pull out an old copy of Bruno Bettelheim’s book The Uses of Enchantment – The Importance and Meaning of Fairy Tales; a child psychologist, he was a fan of the value of  fairy tales for young people, believing they provided a safe environment to liberate their emotions.

… how wandering in enchanted worlds, children develop their own sense of justice, fidelity, love and courage… not as lessons imposed, but as discovery, as experience, as an organic part of the experience of living.

Books like Erin Morgenstern’s  The Night Circus, invite us to return to that world as adults, discerning a slightly different but no less valuable meaning, as we have grown older and a little more cynical, able now to find deeper meaning in the analogies offered.

It is a tribute to the imagination, to a darkness that is not despairing and the light that always finds a way to reignite the flame.

37 thoughts on “The Night Circus”