Ann Patchett’s novel, shortlisted for the Orange Prize for fiction has left me pondering. Wondering what it was I missed that caused others, such as Joanna Trollope to say:

Every so often – and that’s not, actually very often – I read something that makes me want to press fervently and evangelically onto everyone I meet. This has just happened with Ann Patchett’s novel State of Wonder…

And Emma Donoghue who said:

The best book I have read all year. It made me laugh and weep and left me in a state of wonder 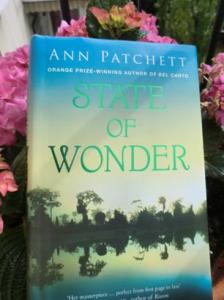 Marina Singh is a doctor working for a pharmaceutical company since switching from obstetrics to pharmacology near the end of her studies. Coincidentally, one of her female professors Dr Swenson also works for Vogel and is acting solo, outside her jurisdiction in the Amazon, observing a tribe whose unique development could have significant implications for the lives of women and humanity. This rebellious, unorthodox researcher and her unique way of working has been tolerated by the company, until a letter arrives informing the CEO Mr Fox of the death of a staff member he sent to report back. Marina is asked to follow-up and becomes drawn into the alternative universe of life in the Amazon jungle.

It is an interesting concept and a thrilling journey, one of the most moving and real parts for me being an encounter with an anaconda that almost had fatal consequences. However, throughout the book, I couldn’t shake off a sense of reluctance, of characters holding back; was Mr Fox being honest or was he hiding something? Why doesn’t Marina question or insist on answers?   It was hard to believe that the head of a large pharmaceutical pouring significant funding into a research project would tolerate the situation without acting in a more forthright manner.

Dr Swenson was definitely withholding, resisting, imbued with a sense of superiority that didn’t ring true or convince me. Ironically, as Marina begins to accept the way of life in the jungle I could very well see her becoming part of that environment which would have been interesting to pursue further, more so than the enigmatic Dr Swenson.

True, I was somewhat impatient to get to the Amazon itself and for that I blame an unquenchable thirst for adventurous travel and the fact that as far back as I can remember, the Amazon was the VERY first destination that my younger mind desired to visit. I remember it vividly even now, a feeling that grew after watching ‘The Emerald Forest’ (1985), a film that had a real effect on me, I fell in love with the wilderness of the Amazon and vowed that one day I would go there.

The film is based on the true story of a 7-year-old boy kidnapped by Indians, who disappear into the Amazon forest. The boy’s father, a Venezuelan engineer, spent every summer for the next 10 years searching the forests for his son and eventually found him.

It is quite likely then, that this memory may have had an effect on any impression this book could make, something that represents an unfulfilled dream for me and not one which involves pharmaceutical companies looking for a profit or scientists tampering with nature. So don’t let me stop you from finding out for yourself, it’s certainly one to discuss and as you can see from the quotes above, for some this book is a definite favourite.

35 thoughts on “State of Wonder”