I couldn’t let the day pass without acknowledging that it is 200 years today since Charles Dickens, perhaps the greatest English novelist of the Victorian era, the second of eight children, was born on 7 February 1812 at Landport, near Portsmouth, Hampshire. So…

Though not poor as such, the family went through difficult times and young Charles Dickens certainly experienced and saw hardship first-hand, images and memories that stayed with him and manifested themselves over and again through the pages of his life’s work. 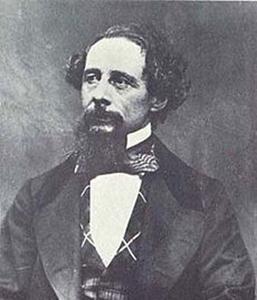 I’ve yet to start one of his books this year, though I have plans to read his last novel ‘Our Mutual Friend’ and ‘David Copperfield’, the latter said to be close to his own childhood experiences and perhaps less painful for him to write than his abandoned attempt to write his own autobiography, which he found too distressing to continue.

It is a testament to his popularity that his works have never been out of print and continue to be read as much today as they did when they were serialised in publications in the 19th century.

To experience or learn more of Dickens world, there is Claire Tomalin’s recently published ‘Charles Dickens,  A Life’ , an exhibition at the Museum of London and a brilliant website where you can get completely lost in Dicken’s facts and memorabilia.

My favourite commemoration thus far, would have to be Dovegreyreaders scribbles in relation to his support and inspirational campaigning for England’s first children’s hospital, the great and wonderful GOSH, Great Ormond Street Hospital.

So, do you have a favourite Dickens novel or plan to read one this year?

18 thoughts on “What the Dickens!”