I was drawn to read this having never heard of the Irish myth, fairytale The Children of Lir and I was intrigued by the Gaelic names and words. I’m planning to read Tangleweed and Brine, a collection of shorter retold stories by the same author as well.

I loved the structure of the book, the italicised pages preceding some chapters that narrate a classic version of the tale, followed by the author’s chapter which provides greater depth and is told from the point of view of Aife, the middle sister, married off to Lir after her sister died in childbirth, who casts a spell on these children that disgraces her forever, and is punished in turn.

In an interview the author speaks of having an affection for the story since first encountering an illustrated version, as a child in the Galway City Library.

I was pulled to her, so much of the narrative unfolds because of the force of her, her need for love, her anger and her strength, but she disappears once she has been shamed and punished, transformed into a demon of the air. I didn’t know what a demon of the air was, but I wanted to know.

I can imagine she is usually depicted as sinister, she is a stepmother after all and they seemed destined to not be capable of any act of kindness or heroism in storytelling across all cultures, so I suppose we ought to be grateful that at least she will encounter forgiveness. I did hold out hope that perhaps the author might have dug deeper or stretched the imagination to somehow redeem this woman’s callous actions even more. I wish there could have been room for more engagement with the source of her pain and regret. 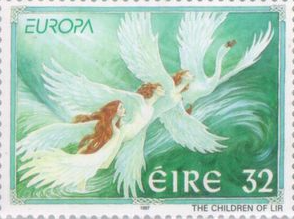 It is a strange tale as her actions seem to be on account of her character – or perhaps due to a deep unacknowledged resentment at having been severed and separated, along with her two sisters, from their parents at a young age – rather than any apparent bad treatment by the husband or father as one might expect. Something in her motive remains a mystery despite the little soul searching she does.

“Perhaps I am a dark, unpleasant creature. But I am my own creature. I am mine, my feet on the earth and the water in my soul and fire in my heart. And when all is taken from me I will still have my anger and my pain and they will feed me.”

Calligrams, Poems and the Artful Language Of Ogham

The artwork and use of feathers is brilliant, I enjoyed that each chapter had a mysterious, almost cryptic illustration of calligrams and poems laid out in particular shapes, their titles words from a language I’d never heard of. The shapes mimic the characters (and many letters are said to be linked to trees), using letters of the earliest Irish medieval alphabet Ogham.

I couldn’t help but add my own little autumn tree representation to some of the pages below, the photos can be seen and read more clearly in this thread I created here. It is a day for rituals after all.

Reaffirming once again (having just read A Ghost in the Throat) the importance of poetry, storytelling and creativity to Irish myth and culture, in its many forms.

is an award winning author from Galway, Ireland and this is her tenth book, which has been shortlisted for an Irish Book Award 2020. Her collection of dark and witchy fairytale retellings, Tangleweed and Brine won Book of the Year at the 2018 Children’s Books Ireland awards and Young Adult Book of the Year at the 2017 Irish Book Awards. Her play Wake was performed at No Ropes theatre company in February 2019.