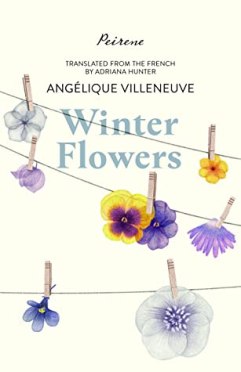 Winter Flowers (Les Fleurs d’hiver) by Angélique Villenueuve, translated by Adriana Hunter is published Oct 7 by Peirene Press, a boutique publishing house, specialising in high-quality first-translations of contemporary European novellas that can be read in an afternoon.

A young woman in 1918 Paris is considered one of the fortunate, when her husband returns from war injured. Wearing a face mask. He lived. He is not the same man who left. When Toussaint Caillet was transferred from the department of facial injuries at Val-de-Grâce military hospital, he sent Jeanne a one sentence note ordering her not to visit.

They have a 3 year old daughter who only knows her father by the portrait of the soldier on the wall of their cramped quarters. She has two fathers, the Papa who left and the man who returned.

Of course she’d expected that the war and his injury would have changed him, but she’d never tried to imagine the scale or even the nature of this disruption. The letter he’d sent her in January 1917 had been a dark window and, once she’d stomached the pain of it, she’d made a point of not reopening it.

Jeanne works from home making artificial flowers, she is trying to be patient and understanding, but her husband’s refusal to engage inflames her.

Sitting at her table, Jeanne senses nothing. It has to be said that the huge red dahlias, whose wound-like qualities are accentuated by the light of the oil lamp, completely absorb her in a swirl of scarlet. The repeated gestures gradually steal over her body, leaving no part of her in which she can drift. When Jeanne sleeps or closes her eyes, when she’s most absent in mind or body, she knows this much: the flowers are still there and always will be.

When he finally leaves the room, she follows him. It is not the first time.

Her neighbour Sidonie, a seamstress, has lost almost everything, they support each other. She is about to be tipped over the edge.

Winter Flowers exquisitely renders a situation many lived through and few understood. The silence and destruction of men who survived, who came back traumatised. Who never spoke of what happened. Who may or may not have healed. And the women who stood beside them, who persevered, who sacrificed and learned to live with the reality of what they too had lost.

Like all women whose husbands or sons had been mobilised, though, she’d heard countless stories about men’s homecomings. Poor women. Those who entrusted a sheep to their country  were given back a lion. Someone who’d sent out a young lad was said to have come home an old man, or mad.

And there were so many, Jeanne was well aware, who would never come home at all.

Despite the terrible events and circumstances, the hopes and fears, the woman too must participate and receive the words of recognition from those in power, despite their grief, unable to express their truth.

The mayor’s words are incomprehensible they come and go and sting. Jeanne doesn’t know whether it’s up to them, the women here, these workwomen, to tame the words and arrange them in the correct order, whether it’s really to them that they’re addressed. They flow too quickly. They fly too high. There are too many of them.

Thunder and fire, men freezing and caked in mud and half poisoned by noxious gases, heroes, brothers, love, defeat, hope, victory, history peace, blood, martyrs, children. His speech is riddled with these impassioned fragments. And, just like the battles experienced by those who are now dead, these official words accumulate terrifyingly, chaotically over the gathering. It’s a bombardment, and Jeanne, busy as she is shoring up her neighbour’s faltering frame, struggles to withstand its fire for more than a few minutes.

It is a lament, a form of consolation, a living mourning, of how a family rebuilds itself after an event that has wreaked devastation on them all. Day by day, acknowledging the small wins, with patience, forgiveness, empathy and imagination.

I loved it.  A heart-rending, visceral account of loss and the accompanying overwhelm of steadfast perseverance. The tidal-like edge of madness and the surreal act of continuing despite it. Women.

Every few pages, I marked passages, highlighted sentences and rereading them as I write this, felt like going back to beginning and reading it over again, so rare is it to encounter this perspective, to share how it might have been for those who waited and wailed, who persevered and attempted to recreate a new life from the wreck of what returned.

Angélique Villeneuve writes with great empathy, sensitivity and understanding in narrating a story from the little explored perspective of the young working woman dealing with the aftermath of war, in which they have all changed and must live in a post traumatic world, with little knowledge of how to navigate it.

Born in Paris in 1965, Angélique Villeneuve lived in Sweden and India before returning to her native France. The author of eight novels, she has also written numerous children’s books and poetry.

Villeneuve’s novel Maria (2018), won the SGDL Grand Prix for fiction. Her most recent work, La Belle Lumière (2020), is a fictional account of the life of Helen Keller’s mother.

Winter Flowers is the first of her books to be translated into English.

N.B. Thank you to Peirene Press for providing me a review copy.