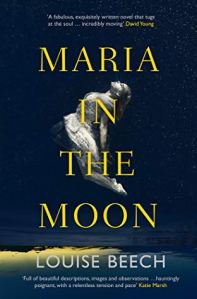 Maria in the Moon intrigued from the moment I looked at its beautiful cover and read the title, wondering what the significance of it was. This tender novel hooked me from its opening pages and never let go until I heard that chant ‘maria in the moon’ and understood.

We meet Catherine-Maria as she is recalling her beloved Nanny Eve who chose her name and used to call her in a sing-song voice, we read about the Virgin Mary statue passed down from mother to daughter, and become aware of a memory block in childhood.

But one day she stopped singing.
She stopped calling me the long, pretty name she’d chosen when I arrived.
I try now to remember why, but I just can’t.
I think it was winter; I think the sun no longer had the strength to kiss our heads.
I know I’d accidentally smashed the Virgin Mary.

Something stopped all the singing in their house and when she tries to remember all she sees are the shattered porcelain pieces of Pure Mary spread across the floor.

Catherine has had to move out of her home into temporary accommodation and decides to volunteer at the local Flood Crisis helpline, an occupation she already has experience in. Here she remembers her first call at a Crisis Centre.

I’d learned well on the course; I was non-judgemental, patient, gentle. My first caller was a fifty-year-old man who’d been married for thirty years, but had always been desperately in love with his friend Jim.
‘What should I do?’ he’d asked.
It wasn’t for me to tell him, only to listen, ask the right questions, and let him figure out his own feelings. I was shaking when the call ended but felt empowered.

Going to work at the Flood Crisis Centre, taking calls and getting to know others who volunteer to do this kind of work through this novel was fascinating and felt real, it reminded me of reading Eleanor Oliphant and her work environment and interactions, there is a similar feeling of closeness to the characters and an awareness of the character’s underlying solitude, as expressed in this quote from Olivia Laing’s book, The Lonely City:

“…loneliness is hallmarked by an intense desire to bring the experience to a close; something which cannot be achieved by getting out more, but only by developing intimate connections. This is far easier said than done, especially for people whose loneliness arises from a state of loss or exile or prejudice, who have reason to fear or mistrust as well as long for the society of others.”

Her first shift at the Flood Crisis Helpline runs smoothly, and she begins to develop a close connection with her mentor Christopher, however something about this new experience triggers an awakening of her childhood memories, and more disturbingly brings back a recurring dream.

Over the weeks that follow, from the Sunday lunches with her extended family, her conversations with work colleagues and her flatmate Fern, she gains clarity around her own personal mystery and in a dramatic denouement confronts her past and puts a few ghosts plaguing her mind to rest. 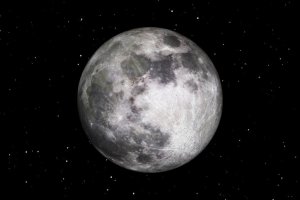 Maria in the Moon is one of those books you want to get back to every chance you can, it was gripping until the end, and even the quiet and mundane parts I found riveting. I loved going to work with Catherine and listening to her handling calls, the characters were well formed and contributed to a deeper understanding of the dynamics surrounding her, but also raised questions.

There came a time – and I’m not sure when it was – that I fell out of love with her. Maybe it was after Dad died. She changed. But so did I. Where she had treated me well (but a little coolly) during his lifetime, she now grew impatient, was less willing to talk. Perhaps it was during my forgotten ninth year that I stopped trying to please her and no longer wanted to copy her elegant style. Instead, I did all I could do to oppose and annoy and argue.

I wanted to know more, to ask her how she coped growing up without knowing her Mum, her attachment to Mother (stepmother); there’s an unselfish compassion within her, masking the ache of losing both parents at a young age and her response to it is to stay close to the family she’s been left with, despite the friction, claiming it as her own.

With Louise Beech, there is always depth, there are layers to unfold, there are stories beneath stories. I have my own personal story of a mystical experience while reading her debut novel How to Be Brave (review linked below) and I learned that Maria in the Moon has also inspired a song, created by singer Carrie Martin, you can read more about its creative inspiration here at Louise Beech – Making Magic With Words.

What more can I say, I’ll read everything Louise Beech writes, she’s entertaining and an inspiring author who writes from the heart and one who’s open to the magic and the mystical.

Buy a Copy of One of Louise Beech’s novels here

My review of her debut novel How To Be Brave

My review of her second novel The Mountain in My Shoe

6 thoughts on “Maria in the Moon by Louise Beech” 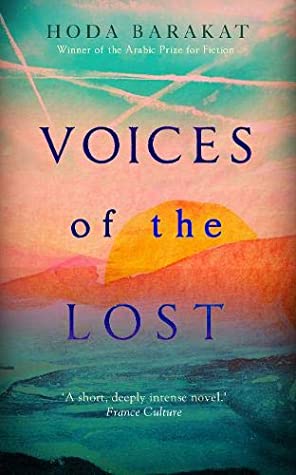