Lara’s father works abroad and early on in the story when Lara is seven, she and her sister learn he isn’t coming back home to Australia. She is close to her grandfather Opa, though realises a little late that there is much about his life that she doesn’t know, questions she never asked him, a subject her mother won’t speak of.

At his death, her great-aunt passes her the contents of an old wooden box, objects wrapped carefully and put away, never to be looked at; they will prompt her to travel to Germany to uncover his role in the second world war. 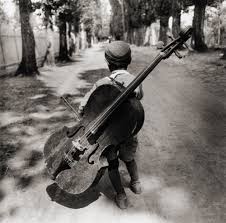 At this point, we go back to the 1930’s to a small village in Germany where Tomas (Opa) and his friend Gustav live, Tomas’ father repairs violins, cellos and similar musical instruments and although initially Tomas doesn’t wish to play, when Gustav becomes interested and starts taking lessons, Tomas’ rekindles his love for the cello and will pursue music with the same determined passion his father had wished he would pursue a profession.

In school they are wary of the bullying Hans and his troop of followers and avoid them as much as they can, observing as they become teenagers their joining up a young Nazi youth group, something Tomas and Gustav avoid, but as 1939 approaches it will become impossible not to join their country’s ranks.

The story of the boys in their youth reminded me of David Mitchell’s excellent novel Black Swan Green and Niki Tulk successfully captures that essence of survival developed by children on and off the playground, only here for many, those playground antics would escalate to being drafted into Hitler’s Wehrmacht, and a war with repercussions and psychological consequences that would continue into subsequent generations.

Lara’s grandfather arrived later, a thin half-man on a ship that emptied its human cargo unsympathetically into a bright and bristling land. Here, not long enough after the Second World War, those who bore in their eyes another hemisphere were received with cool politeness. It was not their accents so much as their eyes – they held a silence that made others who had grown up here suddenly feel they needed to defend themselves. Tomas had discovered Lara’s grandmother like a familiar face in this country.

Lara’s search into her grandfather’s past and meeting Anton and friends in Berlin brings those repercussions forward to the present day. Lara’s own fragility and insecurities threaten to undermine her search and if it weren’t for Anton, her patient guide and new-found friend, we are left with the impression that her endeavour may quite well have failed. Her journey seemed at times so realistic, she seemed so ill-prepared and at times insensitive to what she might encounter by knocking on the doors of strangers, that it felt as if I were reading non-fiction. Unnerving yet totally believable.

The book falls into three main sections, Lara growing up in Australia with her mother and grandparents, Tomas as a boy and young man in Germany and finally Lara at 22-years-old on her extended visit to Germany. 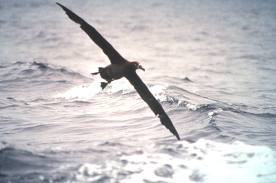 An albatross in flight Photo: Wikipedia

Interspersed throughout the third person narrative, is Tomas’ journey on the boat between Europe and Australia and these short entries of a page or two entitled The Gift of Birds, The Gift of Time, Memory and Dreams provide some of the more poignant passages, they are the pages I returned to and reread a second time, some even a third.

They are written in the first person, at times focused on the present,  on the passage across the ocean and the words of a man making the same voyage who is knowledgeable about birds and their habits, and at other times they describe remnants of his dreams, regrets, the past, all that he intends to leave behind him when he disembarks. They provide a reflective counterpoint to the harsh reality of daily life in Germany as a young man, a life which drove him towards an activity he had no ambition for. These pages rebuild hope and show us the man he was.

“The cycle of the ages is the foundation.”

The man who loves birds stares into his fingers, deep in thought. “They recede, they advance… and the pattern of migration adjusts and adapts over many thousands of years. They are,” he adds, “in tune with the ages, whereas we consider only our own lifetimes. We are short-term thinkers, unfortunately.”

It is a thought-provoking story of the depths to which we go to protect our loved ones from the horrors of the past and suggests that silence isn’t always the route towards salvation, that memories and guilt often live on in subsequent generations, that a deprivation of family knowledge can lead to an obsession to fill in the gaps.

It reminds us that our elders are a source of great learning and that we shouldn’t wait until after they have gone to understand what life has taught them. It cautions us not to judge that which we haven’t experienced and to beware of what we might find when we go digging into the past of those who have tried to bury deep the horrors that return to them only in their sleep.

Thank you Niki for providing me with a copy of your book, not only a great story, but beautifully printed and music to accompany composed together and played by Niki on cello and her husband Mark on piano.