A lone young woman watches the world outside her window from the relative safety and refuge of her apartment, in a British town. She refers to those she observes in the East, West, South tower blocks by pseudonyms, Juicer, No-Lights-Man, Anime Girl. She too is unnamed, a refugee from Syria. 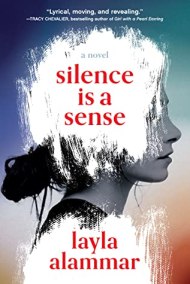 She rarely leaves and when she does, it’s within her self-imposed ‘safe zone’ including the nearby shop, the mosque, and part of the park.

When I first arrived, I couldn’t reconcile myself to the notion that I was free to go anywhere. So I set invisible borders that I abided by for a good, long while.

She has email contact with a magazine editor she sends her writing to, using her own pseudonym Voiceless. She writes a kind of truth, as something of her experience, perspective and trauma passes through her into the page.

The editor is after a more nuanced narrative, truth but not quite that truth, tempering the Voiceless, pandering to the expectations of a home-based audience.

I  don’t know how to explain to her that I am cornered by memories, caged in by recollections. I feel persecuted by the things I remember and by what my mind chooses to hide from me.

Flashbacks from her last days in Aleppo, her friends, protests, declarations, family decisions, a world disrupted.

Journeying alone through a continent that equates refugee with terrorist, and that violence exists even in refuge.

In her silence she is overwhelmed by the other senses, unable to speak, yet filled with so much looking for outward expression. 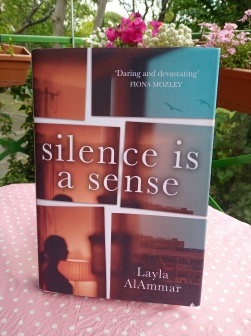 An intense, visceral insight and demonstration of the effect of trauma, the ongoing sensitivities, reactions, the struggle to adapt, to accept safety, to even perceive safety, when threats are observed everywhere, violence seen through windows, threatened against communities.

And yet, something within the human spirit needs to reach out, to have contact, to be a part of what little community is offered, tentative gestures, towards healing.

Sensitively depicted, rather than witnessing the events themselves, the author draws the reader into the fragmented mind of the victim of trauma, making us feel what it can be like, to be in that post traumatic period, trying to live again in an unwelcoming, welcome British town.

While Lalya AlAmmar’s story is fiction and is focused more on the aftermath of of a young woman experiencing her hometown turn into a warzone, on her trying to overcome the feeling of not being safe in another country, and the effect of trauma, I found it helpful having already read a true account of another young woman’s true life experience in Syria, her life before the war, during it and the inevitable escape she and her sister would make alone.

It makes an excellent companion read to AlAmmar’s novel and I highly recommend Butterfly by Yusra Mardini.

NPR: ‘Silence Is A Sense’ Works To Dispel The Terrible Abstractions Of Syria’s Civil War

Interview: Scan, University of Lancaster, An Interview with Layla AlAmmar, Author of Silence is a Sense by Harriet Fletcher

12 thoughts on “Silence is a Sense by Layla AlAmmar”