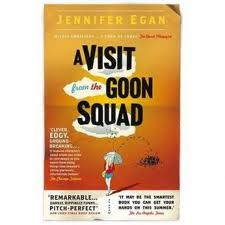 ‘A Visit from the Goon Squad’ by Jennifer Egan (winner of the Pulitzer prize for fiction 2011) was recommended in a comment on my post ‘Why People don’t read short stories’ and I then had the good fortune to swap books with a book buddy and was delighted to discover that this was the treasure she was trading.

There has been much discussion already about the title; what exactly is a ‘goon’ and is this even a relevant question? I decided not to search for an answer and instead to come up with my instinctive response at the end, I prefer to hazard a wild guess although the cynic in me did wonder if it wasn’t just a gimmick.

A novel or a set of stories, each chapter is separate yet connected by the barest of threads to the previous, sufficient to surmise a pattern, although like many creations, the complete picture does not become clear until the work is finished. It reminds me of six degrees of separation, that we are all connected and that even when we are, there are gaps in history’s, we only ever know part of a person’s story.

It is a testament to Egan’s writing  and one of its strengths that her book reads like a novel because we are immediately drawn into and engaged within the world of her well cast characters, mentioned briefly in one chapter, discovered in depth in the next, it is not like starting a completely different story, more like starting an abstract jigsaw puzzle in opposite corners knowing that eventually the pieces should add up. We read and make the connections, searching for them, perhaps even creating them ourselves. I wonder, is that my imagination at work or the writer’s – or both working in unison?

We encounter this in Italo Calvino’s ‘If on a Winter Night a Traveller’ and also in Alice Hoffman’s ‘Blackbird House’, a slim thread enough to spur the reader on in the quest for enlightenment.

In Egan’s novel we meet Sacha who works for Bennie in the music industry, Bennie himself, his wife Stephanie, her ex-convict journalist brother Jules, Dolly who used to be Stephanie’s boss, Ted, Sacha’s Uncle and others whose lives have interacted at some point. We meet them at different periods in time, during particular episodes in their lives where even the young seem to have already lived numerous lives and carry a burdensome past that haunts their present. There is an underlying dissatisfaction with how things have turned out, the inevitability of time passing and taking with it something vital and essential.

Which reminds me, the goon squad; as Bosco says on page 134 ‘Time’s a goon, right?’ and so too I believe that a visit from the goon squad is just this, time passing and the oft harshness of reality.

13 thoughts on “Time Passes, Reality Bites – A Visit from the Goon Squad”